Survey: UPS Issues Are Top Cause of Outages

Problems with UPS equipment and configuration are the most frequently cited cause of data center outages, according to a survey of more than 450 data center professionals. 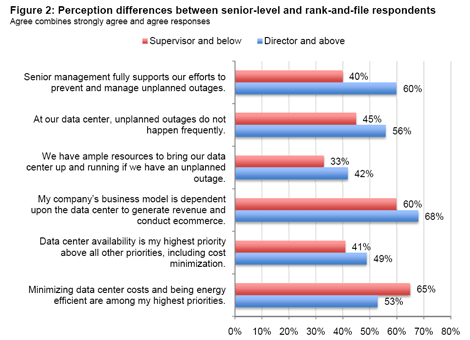 This chart shows the perception gap between the executive suite and data center staff on key issues (click for larger version).

Problems with UPS equipment and configuration are the most frequently cited cause of data center outages, according to a survey of more than 450 data center professionals. The survey by the Ponemon Institute, which was sponsored by Emerson Network Power, also highlights a disconnect between data center staff and the executive suite about uptime readiness.

Here are the most frequently cited causes for downtime:

There were signs that the ongoing focus on cost containment was being felt in the data center. Fifty nine percent of respondents agreed with the statement that "the risk of an unplanned outage increased as a result of cost constraints inside our data center."

"As computing demands and energy costs continue to rise amidst shrinking IT budgets, companies are seeking tactics – like cutting energy consumption – to cut costs inside the data center," said Peter Panfil, vice president and general manager, Emerson Network Power’s AC Power business in North America. "This has led to an increased risk of unplanned downtime, with companies not fully realizing the impact these outages have on their operations."

Perception Gap
The focus on UPS issues isn't unexpected, given the role of uninterruptible power supplies in data center power infrastructure. It's also consistent with Emerson's position as a leading vendor of UPS equipment. But the survey by Ponemon, which is known for its surveys on security and privacy, also points to a perception gap between senior-level and rank-and-file respondents regarding data center outages.

"When you consider that downtime can potentially cost data centers thousands of dollars per minute, our survey shows a serious disconnect between senior-level employees and those in the data center trenches,” said Larry Ponemon, Ph.D., chairman and founder of the Ponemon Institute. "This sets up a challenge for data center management to justify to senior leadership the need to implement data center systems and best practices that increase availability and ensure the functioning of mission-critical applications. It’s imperative that these two groups be on the same page in terms of the severity of the problem and potential solutions.”