Blacklight Supercomputer Powers Up in Pittsburgh

One of the world's largest shared-memory supercomputer systems is located at Pittsburgh Supercomputing Center and dubbed Blacklight, it's already crunching numbers for researchers and engineers. 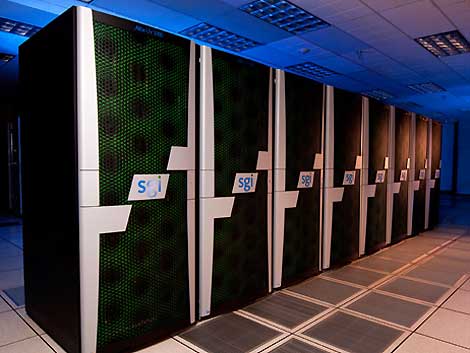 Blacklight, a new shared-memory supercomputer at the Pittsburgh Supercomputing Center (PSC), is up and running and U.S. scientists and engineers are already making productive use of it.

"Because of the extraordinary memory size and relative ease of programming made possible by this system’s shared-memory structure, scientists and engineers will be able to solve problems that were heretofore intractable," said PSC scientific directors Michael Levine and Ralph Roskies in a joint statement. "For many research communities — including data analysis and many areas of computer science — it will open the door to use of high-performance computation and thereby expand the abilities of scientists to ask and answer questions."

"We eagerly look forward to the breakthroughs in science, engineering and finance that will be enabled by this new and novel capability,” said Dr. Eng Lim Goh, chief technology officer at SGI.

"Shared memory" means that a system’s memory can be directly accessed from all of its processors, as opposed to distributed memory (in which each processor’s memory is directly accessed only by that processor). Because all processors share a single view of data, a shared memory system is, relatively speaking, easy to program and use. Coherence, a feature related to the synchrony of read-write operations by different processors within the system, is important for rapid expression of algorithms and in many large data-analysis tasks.

Tip of the hat to CNET for “SGI's old-school supercomputer now revved up.”