The Blackbox Lives! Or at Least is Not Dead

Oracle will continue to build Sun "Blackbox" containers, but only upon customer request. A repeat of Sun's 73-city Blackbox world tour seems unlikely. 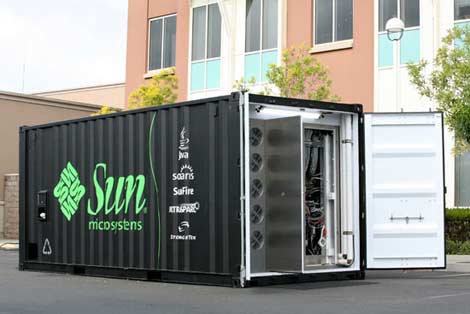 Oracle said this week that it will maintain the Sun Blackbox (MD S20) container product.

One of the many unanswered questions surrounding Oracle's acquisition of of Sun Microsystems was the fate of the Sun "Blackbox" data center container business. In the fall of 2006, Sun became the first server vendor to introduce a shipping container packed with servers, and has invested significant time and effort on evangelizing the container concept.

When Oracle closed its purchase of Sun, it made no comment on the fate of the Blackbox, since rebranded to the more boring Sun MD S20. What we heard at the time was that Oracle wasn't killing the container program, but wasn't promoting it, either.

This week Oracle confirmed that approach. Blackbox containers are “not officially part of the catalog, but we are building them,” Oracle Senior Sales Consultant Tiffany Strause told DataCenterDynamics at the company’s Next-Generation Data Center event Tuesday. Oracle won't maintain an inventory of Sun MD containers, but will build one upon customer request.

Without active support, it's not clear how many Oracle customers will choose the Blackbox as the form factor for their deployments. But it's clear there wil be no more world tours like the Sun promotion in which the Blackbox prototype visited 73 cities on 4 continents and was toured by more than 12,000 customers and partners.