Do you pursue James Bond-level secrecy for your data center, or invite the mayor in for a tour? An Oregon paper presents a "study in contrasts" between the Google facility in The Dalles and the new Facebook facility being built in Prineville, Oregon. 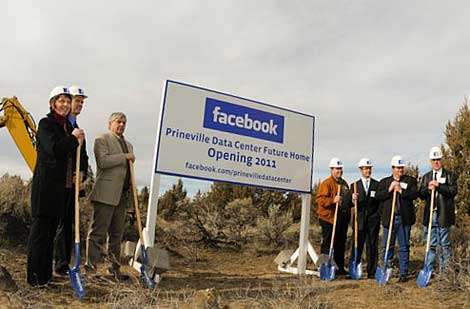 Facebook welcomed local officials to a public ceremony last year when it broke ground for its new data center in Prineville, Oregon.

Lots of companies simply DO NOT talk about their data centers, or even acknowledge their existence. But that's starting to change, as some companies are pursuing a more open approach and a deeper level of engagement with the communities where these facilities are located.

So do you pursue James Bond-level secrecy around your data center, or invite the mayor in for a tour? That's the topic of a story in The Dalles Chronicle, the local paper serving The Dalles, Oregon, where Google operates one of its many Internet data centers. The paper presents a "study in contrasts" between the Google facility in The Dalles and the new Facebook facility being built in Prineville, Oregon.

Both Google and Facebook sought secrecy during their site selection process for their Oregon sites, adopting codenames for dealings with local officials. But their approaches diverge from there.

Focused on Secrecy
The Dalles Chronicle reviewed two years of correspondence between Google and the city, in which Google argued that information it shares with The Dalles should not be subject to public records disclosures, despite the fact that Google is benefitting from a local enterprise zone. Documents showed that officials in The Dalles made a series of requests for  employment data before it was able to verify that Google had met the terms of its agreements.

Facebook has taken a different approach. It held a groundbreaking announcement with local officials, and has used the Prineville Data Center Facebook page to engage with the community, sharing a detailed list of nearly 60 contractors working on the project, along with regular updates on the ways the company is contributing to the community. An example: Facebook and its construction contractors, DPR/Fortis, are sponsors of the Crook County Fair and local Picnic in the Park events in Prineville.

A Fair Comparison?
In some ways, the comparisons aren't entirely fair to Google. The Dalles was one of Google's first company-built data center projects, and a lot changed in the three years between the groundbreakings for the Google and Facebook projects.

In those three years, the push to improve energy efficiency prompted a growing number of companies to share information about the design and operations of their data centers as part of an industry conversation about best practices.

Google has been a part of this effort, holding the Google Efficient Data Center Summit and publishing video and presentations from the entire event. In The Dalles, Google has worked to overcome any hard feelings generated by its secrecy. Like Facebook, it has its own web page for its data center, including a community outreach section.  It has similar pages for its facilities in North Carolina, South Carolina and Iowa, and has held events for the local community at each of those facilities.

The Missing Data Centers
And yet there are other fronts where Google's focus on secrecy remains intact. Take, for example, the selective updating of Google Maps. Google's data centers in The Dalles are clearly visible on rival mapping sites from Microsoft and Yahoo, but nowhere to be found on Google Maps, which appears to be using imagery of The Dalles from before the data centers were built in 2006.

This is a little odd, given that the facility is one of the data center industry's most photographed facilities. Pictures of the data center buildings at The Dalles have appeared on the front page of The New York Times, and more can be seen at Information Week and on Flickr. A copy of Google's site plan was published by Harpers.

A MIssed Opportunity?
The Dalles Chronicle discusses Google's secrecy as a missed opportunity.

"In the four years since Google set up shop in The Dalles, it has done a lot of good," writes the Chronicle. "The company has made a strong effort to hire locally and has donated tens of thousands of dollars to various community initiatives — strategies Facebook is now echoing. But the company’s reluctance to make information public may have prevented it from cultivating the type of relationship with the community Facebook appears to have forged with Prineville."

One of the Facebook employees who spoke with the Chronicle was Ken Patchett, the operations manager at the Prineville project, who previously served a similar role at Google's data center at The Dalles.

"This is not cloak-and-dagger secrecy here," Patchett said. "That’s one of the biggest things that we’ve learned versus some other data centers that have been built. Be open."

For our readers: Is it important for data centers to be more open and engage with the community? Is Facebook's approach the way of the future? Or is Facebook simply an anomaly whose business allows a different approach?  Share your view in the comments section below.