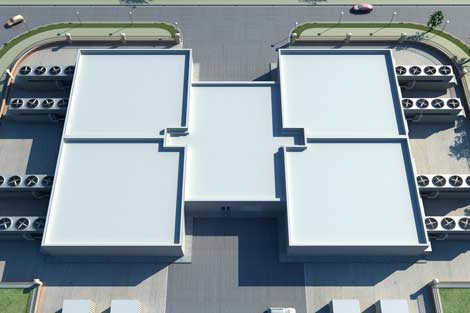 A view of the design concept for the new HP Flexible Data Center, featuring a central networking core, four server room modules, and power and cooling infrastructure housed at the perimeter of the facility.

The HP Flexible DC features a "butterfly" design with a center core module for networking and security, surrounded by four server rooms (IT modules). Cooling equipment attaches to the rear of each data center module, while generators and power conditioning units are housed next to the facility. Each IT module supports 800 kilowatts of IT load, providing a total capacity of 3.2 megawatts for a four-module butterfly configuration.

A Compelling Alternative to Greenfields
"Clients, such as financial service providers, government entities, and cloud and colocation hosts, will find the scalable and modular nature of HP Flexible DC a compelling option," said Kfir Godrich, chief technology officer, Technology Services, HP. "HP can help clients innovate the way they build and operate a greenfield data center for greater savings over its life span."

The "flex" reflects the range of customer options, which includes the choice of four different cooling technologies and five different UPS configurations, featuring both flywheel and battery-based UPSes. HP Flexible DC is optimized for a chiller-less air cooling design, using a slab (rather than a raised floor) and hot-aisle containment to isolate the hot and cold air within the server area.

HP says its most energy-optimized design can result in a Power Usage Effectiveness (PUE) of 1.18, comparable to the lowest efficiency ratings seen at the largest facilities.

Modular data center designs are gaining traction based on their ability to provide predictable, repeatable components for IT and power systems. A growing number of companies are developing modular systems that are built in a factory, transported via container or truck, and then pieced together. This approach can dramatically shorten the construction process at the project site.

Targeting Savings in Energy, Construction
While touting the operating gains from lower energy costs, HP is also making a strong pitch for the modular, pre-fab design's potential to deliver huge up-front savings in the initial construction of a data center. HP says it can build a 3.2 megawatt butterfly data center design for $26 million, or about $8.1 million a megawatt. HP compares this to a next-generation greenfield build, which it says would cost $58 million, or more than $18 million per megawatt.

Companies like Yahoo and QTS have cited figures of $5 million to $9 million per megawatt for next-generation data centers, but primarily for facilities optimized around focused workloads like search. Enterprise data center projects have commonly cited construction costs of between $10 million and $15 million a megawatt, with some project costs ranging as high as $20 million per megawatt.

"The pressure to save on capital and operating expenditures is one of the most critical issues facing enterprises today," said David Cappuccio, vice president and chief of research, Gartner. "When building new data centers, clients need to consider options that support business growth, while also saving time and costs."

HP said the modular approach allowed companies to consolidate data centers while segregating IT assets by group, security level, or workloads (such as software development, production, or disaster recovery) which might require different types of access control or reliability.

The focus on free cooling means the Flexible DC will be more efficient in some geographies. "FlexDC is more effective in locations that have large differences in the dry-bulb and the wet-bulb temperatures, known as the wet-bulb depression," HP writes in its white paper on the new design. "These types of conditions are normally found in arid dry climates. This type of environment coupled with evaporative cooling produces the best results without using much, if any, mechanical refrigeration." 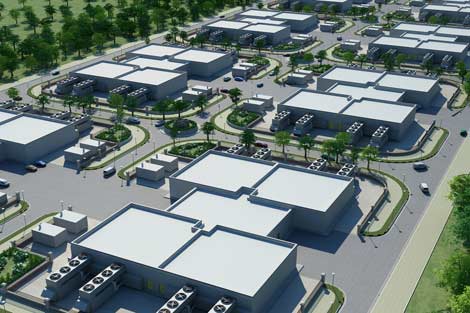