<img src="/sites/datacenterknowledge.com/files/wp-content/uploads/2010/06/facebook-server-growth.jpg" width="470" height="234" />Facebook now is using 60,000 or more servers to support its fast-growing service, according to an analysis of data from company presentations last week. The social network's infrastructure performs more than 50 million operations per second.

It's said that a picture is worth a thousand words. Sometimes a PowerPoint slide can tell the story of thousands of servers.

That was the case with a presentation from Facebook's Tom Cook at last week's  Velocity 2010 conference, which depicted the growth of the company's server footprint. Designed to illustrate Facebook's insatiable need for more servers to support its 400 million users, the chart didn't include any numbers, seeking not to reveal the actual server count.

Dates Provide A Clue
But the chart included dates, which allows us to do some math to fill in the blanks. In a presentation in November 2009, Facebook vice president of technology Jeff Rothschild disclosed that the company had more than 30,000 servers. Cook's chart shows a brief plateau in Facebook's server growth at about that time, followed by a sharp upward spike in the growth line through the first quarter of 2010 that effectively doubles the total number of servers.

That suggests that Facebook now has 60,000 or more servers. The sharp acceleration in Facebook's server growth in late 2009 also helps explain the company's move to lease large chunks of data center space in northern Virginia and Silicon Valley in March. The growth spurt occurred after Facebook announced plans to construct its own data center in Prineville, Oregon.

Why so many servers? Facebook now has more than 400 million active users, including more than 200 million who use the service every day. Here are some other data points from Cook's presentation and a talk last Thursday at Structure 2010 by Facebook's Jonathan Heiliger.

Here’s a look at some of our past coverage of the growth of Facebook’s infrastructure: 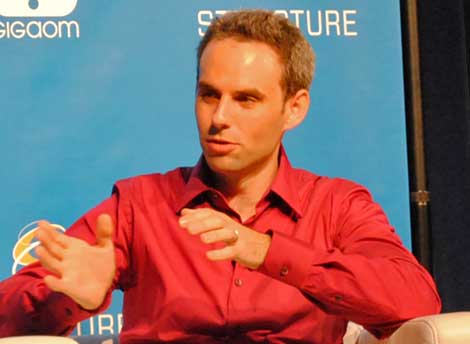 Facebook VP of Technical Operations Jonathan Heiliger discusses the infrastructure for the social network at Structure 2010 (Photo by Colleen Miller).