<img src="/sites/datacenterknowledge.com/files/wp-content/uploads/2010/06/google-container-stack.jpg" width="453" height="445" /> Google has been awarded a patent on data center layouts that stack containers up to four high, and others featuring rows of containers attached to a central power spine or distributed in girds organized along shared power and cooling lines. 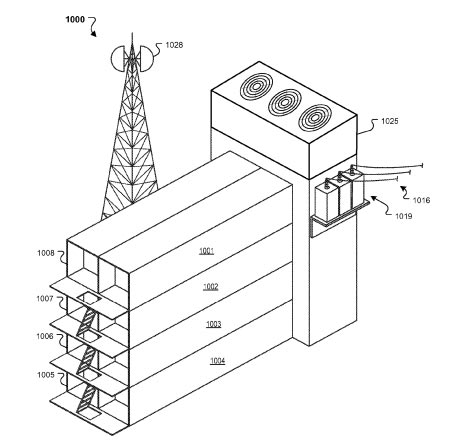 An image from a just-issued Google patent depicting a stack of data center containers.

It's been more than a year since Google confirmed its use of data center containers, publishing a video tour of a container-based facility built in late 2005. Since then, Google has been pretty quiet about its recent data center innovations. But the company has continued to work on design concepts for container-based data centers.

On Tuesday Google was awarded a patent on data center layouts that stack containers up to four high, and other designs featuring rows of containers attached to a central power spine. The patent was filed in June 2007, providing more recent insight into Google's designs than the container data center disclosed last year.

Google was awarded a patent on a portable data center in a shipping container in October 2008, and containers also featured prominently in Google’s patent filing for a floating data center that generates its own electricity using wave energy.

But the new Google patent emerges as container-based designs appear to be gaining broader acceptance, prompting more substantive discussion about how modular designs may evolve.

The designs described in the patent filing ("Modular Computing Environments") feature an enclosed central utility spine, which provides protection for supply lines to provide power, network connectivity and cooling fluids (which could be water or refrigerants). The server-filled containers connect to the spine at docking stations lining the exterior of the structure.

Tower of Containers
One design depicts a vertical utility spine topped by a cooling unit, with containers stacked four levels high and two wide. Upper-level containers are accessed via a series of platforms and ladders on the front side of the containers. The designs appear to be optimized for outdoor installations. For more details, see Google's Container Deployment Designs for diagrams.

Google's patent describes containers packed with up to 2,000 microprocessors and 5 terabytes of storage. Container sizes could vary from 20 feet to as long as 53 feet, and as many as 100 containers could be included in a single data center installation.

Each of the containers includes a sub-floor heat exchanger featuring a piping system filled with "cooling fluid" (which could be water or refrigerant). Warm air from the hot aisle is passed over the pipes and then returned to the cold aisle by a series of fans.

Computing On The Go?
The patent also suggests a "computing on the go" strategy in which containers could be deployed while they are still in transit.

Once on-site, Google says containers could be arranged in a number of patterns, "such as a star configuration centered around utility and network distribution points within a ring-shaped connecting hub, or a stacked configuration coupled to a vertical spine. The connecting hub need not necessarily be either linear or circular or any other regular or symmetric shape. "

The Google engineers listed on the patent include Jimmy Clidaras, William Whitted, William Hamburgen, Montgomery Sykora, Winnie Leung and Gerald Aigner. Also listed among the inventors is Don Beaty of DLB Associates, the New Jersey-based engineering and construction management firm that has worked with Google on many of its data center projects.