Manos: Industry Must Prepare for 'CO2K'

In calling data center managers to prepare for carbon regulation, Mike Manos invoked the Y2K crisis of the late 1990s, warning that the industry is unprepared for the cost and consequences of "CO2K" legislation. 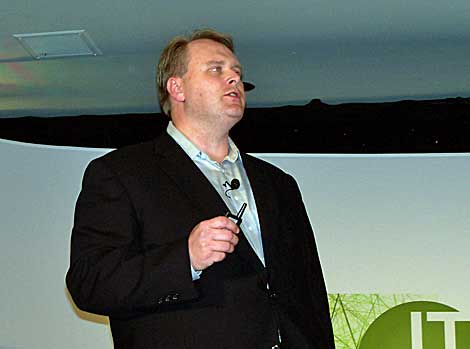 In calling the data center industry to prepare for carbon regulation, Mike Manos invoked the Y2K crisis of the late 1990s, warning that "CO2K" threatens to be similarly disruptive.

"It’s not a question of if (carbon regulation) will happen," Manos said Tuesday in a keynote at the Uptime Institute Symposium 2010. "It will definitely happen. In the UK there are regulations that are already impacting data center operations. As an industry, we are ill-prepared for this."

Manos, the Vice President of Service Operations at Nokia, said the ramifications of carbon regulation are poorly understood. Like the Y2K "Millennium Bug" - which required the updating of two-digit date fields in software code - carbon regulation will be disruptive across organizations.

Data Centers in the Crosshairs
But nowhere moreso than in the data center. Although data centers are unlikely to be targeted by pending carbon legislation in the U.S., Manos predicted that these power-hungry facilities will wind up in the crosshairs.

"Data centers are front and center in terms of the impact," said Manos. "As a large user you are the easiest target to go after."

Manos' assessment of the role of data centers was echoed by other speakers at the Uptime event. Yahoo initially bought offsets to address its carbon output, according to Christina Page, the company's director of Climate and Energy Strategy. But the company soon shifted its focus to improving the energy efficiency of its data centers.

75 Percent of Carbon Footprint
"We quickly realized that 75 percent of our carbon footprint was from data centers," said Page. "The best opportunities for leadership were in that area as well."

Manos called on the audience at Uptime to step up and confront that opportunity - in effect, urging them to embrace a leadership role before it is thrust upon them anyway.

"We have an opportunity to take a leadership position and start driving this issue within our companies and understand our exposure," said Manos. "Your job, as a strategic player in the business, is growing. We are now central to a taxation policy. We may as well be proactive."

An immediate concern is site location for data centers. Pending legislation may not only  boost renewable energy sources, but could also include penalties that have cost implications for utilities that relay heavily on coal in their power generation.

"Carbon emissions differ for a facility in Washington state and a facility in West Virginia," said Manos. "Where your data centers are located today is an important criteria."

The impact of a "carbon tax" was also highlighted by data center energy expert Jonathan Koomey, who said the issue is "not on the radar screen" of corporations.

'A Price for Carbon'
"There will be a price for carbon," Koomey said in his Monday keynote at Uptime. "We have to start thinking about how that price affects the economics of data centers. Carbon taxes will have an impact on where you locate your data centers."

Koomey used the framework of the UK's recently enacted Carbon Reduction Commitment (CRC) to illustrate the potential impact. At the CRC rate of $19 per ton of carbon emissions, a 130,000 square foot data center with coal-sourced utility power might pay an additional $5 million a year.

"That's real money," said Koomey. "If you have a data center in a place that's all coal, that's the business risk you're taking on."

Manos said the CRC has already had an impact on the data center business. "People are not building data centers in the UK because of this," he said.