DuPont Fabros Technology (DFT) moved today to secure funding that will allow it to complete huge data center projects in Virginia and Silicon Valley. The company will sell common stock, and has lined up an unsecured credit line for $85 million. 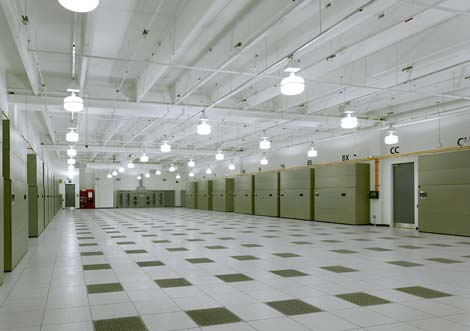 A look inside a data center pod at the DuPont Fabros ACC4 data center in Ashburn, Virginia.

DuPont Fabros Technology moved today to secure funding that will allow it to complete huge data center projects in Virginia and Silicon Valley. The data center developer unveiled plans to sell at least 11 million shares of common stock, and also announced the closing of an unsecured $85 million line of credit.

Shares of DuPont Fabros (DFT) closed today at $23.99, a price at which the stock sale could raise about $264 million, with another $40 million available through overallotment sales.

New Supply in Tight Markets
The company said it would use the proceeds from the stock sale to fund the construction of a project in Ashburn, Va. known as ACC6, as well as its first Silicon Valley facility in Santa Clara, Calif., which will be known as SC1. Both projects allow DuPont Fabros to bring new data center online in markets where quality wholesale space is in short supply.

"We firmly believe that demand for our highly quality wholesale data centers remains promising in all our markets," said Hossein Fateh, President and CEO of DuPont Fabros, in the company's recent earnings call. "We continue to remain a development growth story. We like Santa Clara and believe the market remains very good in this area. It is a logical next new development for us.

"Northern Virginia continues to experience a shortage of supply and in the near term, we don’t see rents softening for the quality of data centers we bring to the market," Fateh added.

Funding Follows Leasing Success
The funding follows a burst of leasing in DFT's Chicago and Ashburn data centers that left the company with filled nearly all of the company's remaining data center space. DuPont Fabros has a single data center "pod" remaining in its ACC5 facility in Ashburn. The company is already building its next center, a large facility in Piscataway, New Jersey.

Earlier this month, the company estimated that it would require $350 million to compelte Phase 1 construction of both ACC6 and SC1. Each facility will be approximately 360,000 square feet, with a total power capacity of 26 megawatts.

DuPont Fabros also said Tuesday that it had lined up an $85 million line of credit, which can be expanded by $15 million if certain conditions are met. Significantly, the loan is unsecured, meaning DFT did not need to pledge any of its data centers as collateral for the loan.

On the stock sale, the joint book-running managers for the offering are KeyBanc Capital Markets, Raymond James, Macquarie Capital, RBC Capital Markets and Jefferies & Company. DuPont Fabros expects to grant the underwriters a 30-day option to purchase up to an additional 1.65 million shares of common stock to cover any overallotments.