Local officials in Christiansburg, Virginia are tight-lipped about the identity of a company scouting the town for a major data center project. But Microsoft is reportedly evaluating potential data center sites in that area. 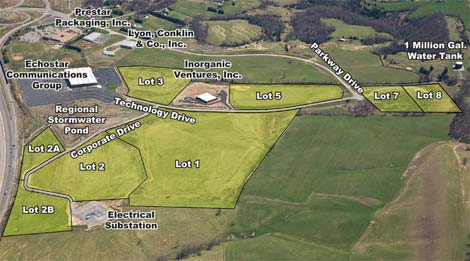 An aerial view of the Falling Branch Corporate Park in Christiansburg, Va., which is reportedly competing for a major data center project.

Local officials in Christiansburg, Virginia are tight-lipped about the identity of a company scouting the town for a large-scale data center project. But they say it's not Google.

That makes the math pretty simple, since Microsoft is known to be evaluating potential data center sites in southern Virginia and western North Carolina. DCK reported in February that the tech giant is in the late stages of site location for a new East Coast regional data center, and has looked at sites in both states.

Last week the Christiansburg Town Council agreed to exempt a prospective tenant at Falling Branch Corporate Park from a diesel-fuel storage limit, a move that would allow the tenant to use as many as 30 backup generators at the site. Council members approved the exemption even though the identity of the company remains under wraps, according to the Roanoke Times. Economic development officials from Montgomery County are working with a major company seeking a data center, which is said to be considering several sites in southwestern Virginia.

Scouting NC, Virginia Sites
Microsoft does not comment on its data center site selection process. Local media in western North Carolina report that Microsoft has visited sites in the region, but have conflicting information about where the company may be searching.

Microsoft is said to be seeking sites for a new data center featuring the company’s latest container-based  design. The container, known as an IT PAC (short for “pre-assembled component”) is designed to operate in all environments, and employ a free cooling approach in which fresh air is drawn into the enclosure through louvers in the side of the container. The container effectively functions as a huge air handler with racks of servers inside.

This next-generation design allows Microsoft to forego the concrete bunker exterior seen in many data centers in favor of a steel and aluminum structure built around a central power spine.

Pitching Hard for Data Centers
Local officials have been actively marketing the Montgomery County region for data center development. The Virginia Coalfield Economic Development Authority (VCEDA) had a booth at the Data Center World Spring 2010 expo in Nashville, where it was handing out information packets promoting Christiansburg as a potential site for building a large greenfield data center.

Large data center builders like Microsoft usually consider a number of sites, and can be exacting in their requirements, given a likely investment of $250 million or more. The Microsoft project appears to be shaping up as another battle between Virginia and North Carolina, which competed head-to-head for the huge Apple data center that is now under construction in Maiden, North Carolina.

Falling Branch Corporate Park is a 175 acre business park located along the Interstate 81 corridor in Christiansburg. The park is 10 minutes southeast of the Virginia Tech campus in Blacksburg. Here's a five-minute video reviewing the site and its infrastructure.