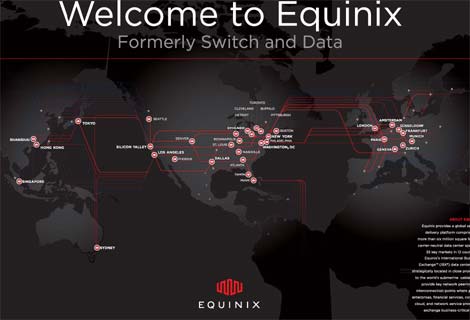 Equinix has completed its acquisition of Switch & Data, creating a colocation juggernaut spanning three continents. The closing of the merger, which announced last October, took place Friday. The consummation of the deal came a week after the U.S. Department of Justice completed a lengthy antitrust review, removing the final barrier to

The purchase of its long-time rival gives Equinix (EQIX) a global footprint of more than 6 million square feet of data center space across 87 data centers in 35 markets in North America, Europe and Asia-Pacific. It also provides Equinix with a presence in 16 new markets across North America, including Atlanta, Denver, Miami, Seattle and Toronto.

Paolo Gorgo of Nortia Research noted the deal's impact on number of available cabinets, based on company data at the close of the fourth quarter. "Switch and Data had about 8,920 cabinet equivalents billing, and an inventory available of about 5,080 cabinets," Paolo noted. "Equinix ended the 1Q 2010 with about 23,600 cabinet equivalents billing in the U.S., and a further inventory of about 5,900 cabinets, half of them already pre-assigned.

"In other words, with this acquisition Equinix almost doubled the inventory of cabinet equivalents available in the North American market," he continued. "Assuming all cabinets could be sold overnight, at an average of $2,000 per month (probably a conservative number), the combined company has, from day one, and without further expansions, the capacity to add an annual revenue rate of about $263 million."

TeleGeography observes that the acquisition "will create a colocation services giant that dwarfs its competitors, both in the US and globally." The research firm estimates that the purchase of Switch and Data gives Equinix a footprint that's about three times the size of its largest competitor, Telehouse.

"While Equinix has emerged as by far the largest provider of colocation services, the sector remains highly competitive," TeleGrography adds. "In the New York metro area alone, Equinix contends with over 50 competitors."

Here's a summary of our previous coverage of the deal: