Does the ash cloud from a volcano in Iceland, which has grounded air traffic across much of Europe, post any operational risk to data centers? 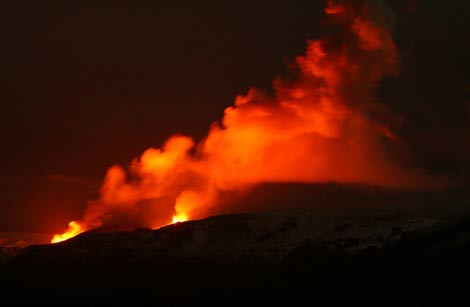 The volcanic eruption in Eyjafjallajokull glacier in Iceland.

Iceland's volcanoes are in the news again, as an ash plume from a new eruption this week from the Eyjafjallajokull volcano has grounded air traffic in much of Europe. The issue is that the particulates in the high-altitude ash cloud can damage aircraft engines, with potentially catastrophic results.

What might the ash cloud mean to Iceland's data center ambitions? In early 2007 the government of Iceland began been touting the country as an affordable destination for data center development, citing its abundant supply of geothermal power. At the time, we noted that companies considering Iceland “not forget the source of all that geothermal energy: Iceland sits atop an active volcanic rift.”

In our subsequent coverage, commenters with experience in Iceland say that eruptions and earthquakes are common but mild, and usually far away from areas where data centers might be built. But what about the risk to data center equipment from particulates? Last fall data centers in Sydney had to shut down external ventilation systems during a major dust storm.

I'm not an expert on particulate filtering. But I bet some of our readers have experience with this topic. Does the volcanic ash cloud pose any risk to data centers in Iceland? How about operational issues for existing data centers in the UK and other nations being affected by the ash? Share your insights and expertise in the comments.

UPDATE: We spoke this afternoon with Verne Global, which is building a data center at a former NATO Command Centre in Keflavik, Iceland. Verne's chief technology officer, Tate Cantrell, said Iceland's volcanic activity was a strategic consideration in their site location. Iceland's predominant wind and weather pattern flows from West to East, so Verne chose a site to the west of the country's active volcanoes, so any ash plumes would be blown away from the data center.

"There's only a very minute chance that a plume of volcanic matter would affect us," Cantrell said. Case in point: Flights were taking off from the airfield at Keflavik, even as air traffic in much of Europe remains grounded.

Verne has engineered its data centery for any eventuality, Cantrell said. If an unusual wind pattern blew volcanic ash toward the facility,  Verne could switch from free cooling to a closed-loop cooling system. The project, which is seeking its first tenants, is housed in former munitions buildings with reinforced roofs, which could support any ash buildup. Roof collapses from ash are a key concern for structures in areas with heavy volcanic ash accumulations.