In an unconventional move, a Minneapolis ISP and hosting provider announced today that it has installed new carpeting in its data center. 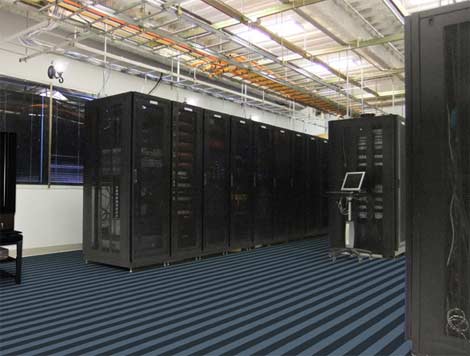 A look at the new carpeting installed in a hosting data center in Minneapolis.

In an unconventional move, Minneapolis ISP and hosting provider ipHouse announced today that it has installed new carpeting in its data center. The move is a departure from flooring decisions seen in most data centers, which typically employ a raised-floor design to accommodate a cooling system in which cold air enters the server area through floor tiles. Some data centers opt for a slab design and introduce cooling from above the racks.

But ipHouse said its approach offered both aesthetic and technical benefits. "The reduced noise in the data center creates a relaxing environment for both the users of the data center and the servers themselves," ipHouse said in its announcement. "This increases the lifespan of the storage subsystems by nearly eliminating the vibrations that affect the spindle wobble on high speed hard disk drives. A quiet/serene data center makes for well behaved servers. This helps us achieve our goal of a datacenter based on the idea that good servers should be seen and not heard."

If you've read this far, you've probably figured out that it's April 1, and the folks at ipHouse have joined in the Internet tradition of April Fool's spoofs (and dragged us along with them). Here's a roundup of some of today's notable pranks, including the Google gag.

UPDATE: We also have an April Fool's Day post from Rackspace Apps and the latest installment in Eaton's series of Thanks, Backup! videos.

Are there any other good data center and/or hosting pranks out there? Share them in the comments.