In a report today on the carbon impact of cloud computing, Greenpeace called on data center operators to power their data centers using renewable energy and use their business clout to pressure utilities and Congress to make renewable energy more readily available. 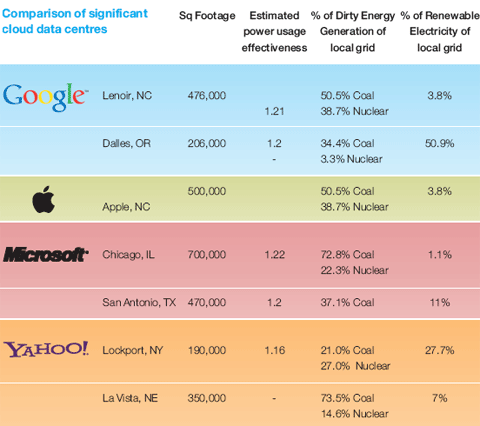 This chart from Greenpeace looks at the power sourcing for major data center projects.

The environmental group Greenpeace says data center builders must become part of the solution to the climate change challenge, rather than part of the problem. In a report today on the carbon impact of cloud computing, Greenpeace called on data center operators to power their data centers using renewable energy, urging major cloud computing providers to use their business clout to pressure utilities and Congress to make renewable energy more readily available.

In Cloud Computing and its Contribution to Climate Change, Greenpeace projects that data centers could consume up to 1 million megawatt hours of power by 2020, with the telecom sector using another 950,000 megawatt hours. Consistent with its focus on advancing its perspective via news coverage, Greenpeace tied its report to the release of this week's release of the Apple iPad.

The report, part of Greenpeace's Cool It Campaign, builds on the group's criticism of Facebook for building its new Oregon data center in an area where utility power comes primarily from coal.

"We are calling on IT industry giants to put their might behind government policies that give priority grid access for renewable sources like wind and solar energy," Greenpeace said. "IT companies should also support economy-wide climate and energy policies around the world that peak climate emissions by 2015. ... The great innovators of the digital age can and should be leaders in promoting an energy revolution."

Greenpeace's Hosting Not Entirely Green
As we've previously noted, Greenpeace is calling data center operators to a standard the environmental group itself doesn't fully meet. Although Greenpeace has taken steps to account for the carbon impact of much of its IT infrastructure, some of its servers are housed in data centers powered primarily by coal and nuclear power.

A key question is whether the concerns raised by Greenpeace will become a factor in site selection for major data center projects. Renewable power is becoming a larger factor in site selection, but remains less important than local incentives, energy pricing and a climate that support energy efficiency measures like fresh air cooling.

"Unless cloud data centres are strategically placed to utilise or be co-developed with renewable sources of electricity, the data centre operators are stuck with the same problem everybody has, and having to accept the mix of clean and dirty energy sources that the electric utilities rely upon to feed the grid," writes Greenpeace.

'Use Power and Influence'
Seeming to realize the challenges in on-site renewable generation, Greenpeace instead calls on cloud computing providers to mobilize politically. "Ultimately, if cloud providers want to provide a truly green and renewable cloud, they must use their power and influence to not only drive investments near renewable energy sources, but also become involved in setting the policies that will drive rapid deployment of renewable electricity generation economy-wide, and place greater R&D into storage devices that will deliver electricity from renewable sources 24/7."

The report adapts earlier findings of the Smart 2020 report for its projections about data center and telecom energy usage going forward. The comibined power usage of the two sectors will be more than triple their current consumption by 2020, and "more than the current electricity consumption of France, Germany, Canada and Brazil combined." The Smart 2020 report uses data from McKinsey, which prepared a 2008 report for the Uptime Institute that projected that data centers would produce more carbon than the airline industry by 2020 "if current trends go unchecked."

The Smart 2020 also notes that for all the criticism of IT energy usage, the sector is a huge enabler of improved sustainability. "While the sector plans to significantly step up the energy efficiency of its products and services, ICT’s largest influence will be by enabling energy efficiencies in other sectors, an opportunity that could deliver carbon savings five times larger than the total missions from the entire ICT sector in 2020," the report notes.