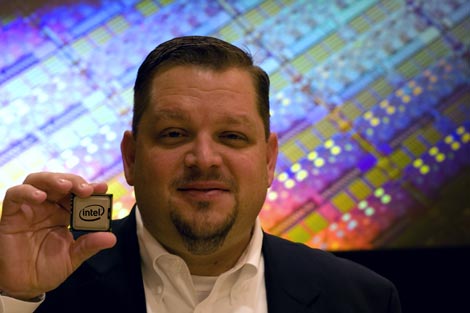 On Tuesday Intel (INTC) launched the Xeon 5600 series processor, blending security, performance and energy efficiency that the company says can significantly improve the economics of data center operations. Intel says one 5600 processor can replace 15 single-core servers, deliver 60 percent better performance than the Xeon 5500 and achieve a return on investment in as little as five months.

The introduction of the 5600 marks the next step in the transition to the Intel 32-nanometer processors, formerly code-named Westmere. The 32nm logic technology uses Intel's second generation high-k metal gate transistors to increase speed and decrease energy consumption. Processors within the Xeon 5600 family range from a four core L5609 at 1.8GHz all the way up to a six core X5680 running a 3.33GHz.  All chips have 12MB of L3 cache regardless of core count.

"The performance of the Intel Xeon processor 5600 series is so compelling that it’s absolutely justifiable immediately in terms of ROI, to simply replace Legacy service, a whole rack of servers, or whatever it happens to be with a single platform," said Simon Crosby, CTO, Data Center & Cloud, Citrix Systems said. "We did it ourselves for our own IT workloads and reduced 264 servers to 16 and in the process got high availability and agility as a result."

Two trends tied to the economic cycle may boost interest in the 5600. Corporate cost-cutting has prompted many companies to postpone major purchases, as Intel notes that "80% of the sever install base is up for refresh." Enterprises that are spending on IT have focused on investments that can bring savings through improved efficiency. The 5600 offers savings opportunities on several fronts: either by keeping the same CPU power but gaining up to 40% more performance per watt, or by lowering power by 30% while retaining the same performance as a 5500 series chip.

As most of the major hardware vendors line up to offer the new chips, Intel boasts 12 new world records for two-socket servers and workstations. Here are some of the related vendor announcements and stories about the new 5600 line of processors: