Is Google's Network Morphing Into a CDN?

Google has dramatically increased its use of peering over the past year, and has also accelerated deployment of local caching servers at large ISPs, making the company's network resemble a content distribution network (CDN) such as Akamai. 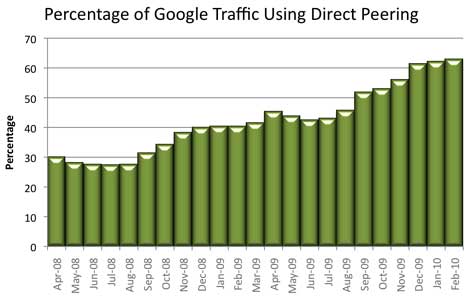 A chart from Arbor Networks showing the growing use of peering by Google.

Google has dramatically increased its use of peering over the past year, and has also accelerated deployment of local caching servers at large ISPs, making the company's network resemble a content distribution network (CDN) such as Akamai.

The latest information about Google's network structure has emerged from an analysis by Arbor Networks, which has revived debates about Google's bandwidth costs, a topic we've examined several times here at DCK. There's a discussion of YouTube's bandwidth bills today at Slashdot, while Stacey at GigaOm focused on Google's famed infrastructure advantage.

The Arbor analysis examines how Google has boosted its use of peering and cache servers to shift more of its content closer to its users. The Arbor chart pictured above shows that the percentage of Google traffic using direct peering climbing from 40 to 60 percent over the past 12 months. That's a huge increase, given the amount of traffic involved.

Peering allows two providers exchanging large volumes of traffic to save money by connecting directly, rather than routing traffic across their paid Internet connections. Peering is often free as long as the amount of traffic exchanged is not out of balance, providing substantial cost savings for bandwidth for high-traffic sites and networks.

Google participates in about 100 public Internet exchanges around the world, and also connects with other networks in 56 private peering facilities operated by providers like Equinix, Terremark, Telx,  Telehouse, Interxion, CoreSite and Level 3, among others.

Expanded Use of Caching Servers
Arbor's Craig Labovitz also provides some interesting detail on Google's caching strategy. "Over the last year, Google deployed large numbers of Google Global Cache (GGC) servers within consumer networks around the world," Labovitz writes. "Anecdotal discussions with providers, suggests more than half of all large consumer networks in North America and Europe now have a rack or more of GGC servers."

This has, in effect, made Google's network look a lot like CDNs such as Akamai or Limelight Networks, which have caching servers at ISPs around the globe. The Google caching servers allow large ISPs to serve Google content from the edge of their network, reducing backbone congestion and traffic on peering connections.

This has a telescoping benefit on bandwidth savings - Google can use the peering connections to reduce its transit costs, and the local caching to further reduce its peering traffic. For more on Google's peering philosophy and practice, see this 2008 document (PDF).

Microsoft Also Adopts CDN Architecture
Google isn't the only Internet titan that has restructured its network to adopt CDN practices.  In 2008 Microsoft began building its own CDN, known as the Edge Content Network.

Both companies are preparing for the "tidal wave" of video-driven data described by Brian Lillieof Equinix in his keynote last week at Data Center World. Lillie said Internet traffic growth is being driven by the development of mobile apps for the iPhone, Blackberry, Android phones and other mobile devices. As these new apps bring a universe of everyday tasks into the palms of users’ hands, usage is accelerating – along with the data traffic streaming across global networks.