Microsoft 'All In' on Container-Powered Cloud

CEO Steve Ballmer has rolled out the new mantra from Redmond: Microsoft is "all in" on cloud computing. His co-star at the University of Washington was one of the company's next-generation data center containers. 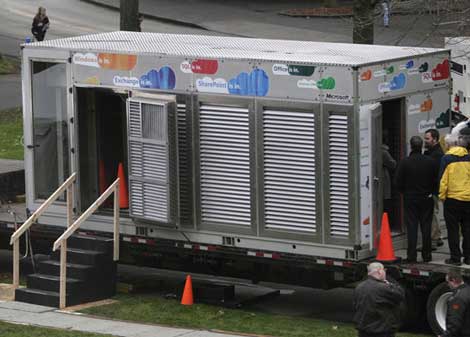 Microsoft had one of its data center containers on display at the University of Washington Thursday as CEO Steve Ballmer spoke to students about his vision for cloud computing.

Microsoft CEO Steve Ballmer today emphasized that "when it comes to the cloud, we are all in." He shared that message first in a speech at the University of Washington, later in an all-staff email, and also in a major ad campaign the company is launching today.

Most of Ballmer's talk focused on the end-user experience of cloud computing services. But he brought a data center with him: one of the next-generation containers that Microsoft data center GM Kevin Timmons described yesterday in a presentation in New York. The prototype (seen above) is the latest in a series of evolving designs for Microsoft's containers, also known as an IT-PAC (pre-assembled component). The design is likely to undergo additional refinements as Microsoft continues scouting locations for its next major data center.

From a data center perspective, one of Ballmer's most interesting comments came during the question-and-answer session with students, in which he hinted that Microsoft may offer a container packed with Azure technology as a product for on-site installation.

"When you walk outside and see one of those containers, it would be OK with me if we have to dump one into every country or sell some to some people who want to implement them," said Ballmer.

Sell a container? These kind of statements are sometimes parsed out of context by media. So here's the full transcript of the exchange:

STEVE BALLMER: "That's why we talk about a partner cloud, a customer cloud and a public cloud. I mean, I think for a lot of reasons it will be many years before many government organizations will grow comfortable with the notion of their data or citizen data living outside of the jurisdiction.

As technology people we can talk about whether that makes sense or doesn't make sense, and why the protections can be the same, but it turns out the regulatory environment, as you highlight, is imperfect. I mean, the truth of the matter is – our guys were trying to explain this to me a week or two ago – the same data held in the same place but under different operating circumstances has different regulatory blah, blah, blah, blah, blah.

And we can't assume all of the world's important countries are going to even standardize the regulatory framework. That's why when you walk outside and see one of those containers, it would be OK with me if we have to dump one into every country or sell some to some people who want to implement them.

I love Slovenia, it's a great country, but there's only a million and a half Slovenes. This company is not likely to build part of our public cloud in Slovenian anytime soon. So, somebody should be able to implement a Windows Azure cloud in that country. They should be able to buy a device that looks like that or a set of devices and go do that and have that be affiliated for the rapid advance of technology with other things going on in the world.

So, I hear you and I agree that there's a set of issues, but they don't have to be constraints.

Here's just one simple way to think about it. Will all of the world's centralized compute, storage and networking infrastructure all be built out by four or five companies, Microsoft, Amazon, Google, the cloud guys? Will we buy every server computer and every piece of storage in the world? No, that isn't going to happen. I don't think that – if you just think about the level of capital investment that involves.

We need to permit the private cloud, and the kind of thing we're showing, the kinds of things we're doing with Windows Azure is about making sure there's a public version and there's a customer version, and there can be a government version, all based on the same core technology, and there's some innovation to go make that happen." 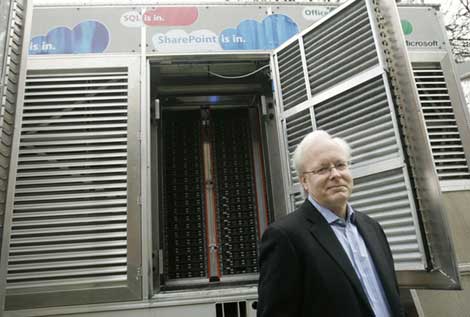 Microsoft Chief Software Architect Ray Ozzie stands in front of a portable Microsoft data center outside the Microsoft Atrium of the Paul G. Allen Center for Computer Science at the University of Washington, where CEO Steve Ballmer spoke Thursday.