<img src="/sites/datacenterknowledge.com/files/wp-content/uploads/2010/03/kundra-nebula.jpg" width="470" height="315" /> The federal government has begun what looms as the largest data center consolidation in history, hoping to dramatically reduce IT operations that are currently distributed among more than 1,100 data centers. 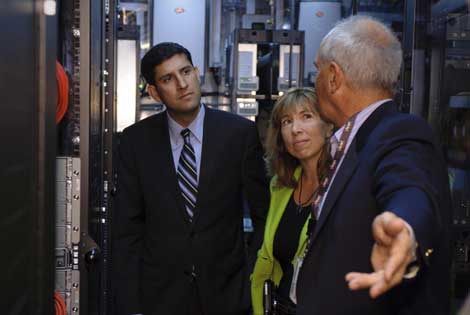 The federal government has begun what looms as the largest data center consolidation in history, hoping to dramatically reduce IT operations that are currently distributed among more than 1,100 data centers.

On Friday Federal CIO Vivek Kundra outlined details of the ambitious plan in a memo that directs federal agencies to prepare an inventory of the IT assets by April 30 and develop a preliminary data center consolidation plan by June 30. These plans will need to be finalized by Dec. 31, 2010, with implementation beginning in 2011.

The consolidation effort figures to generate significant business for companies providing energy efficiency tools and consulting, as Kundra signaled that reducing energy costs will be a driving force in the effort. He noted that the number of government data centers soared from 432 in 1999 to the current 1,100 plus.

"This growth in redundant infrastructure investments is costly, inefficient and unsustainable and has a significant impact on energy consumption," said Kundra. "In 2006 Federal servers and data centers consumed 6 billion kwH of electricity, and without a fundamental shift in how we deploy technology it could reach 12 billion kwH by 2012."

First Assessment Due April 30
The immediate challenge: Federal agencies must conduct a "high-level assessment" of all their IT assessments and data centers by April 30, followed by a more detailed accounting by July 30.

That last bullet point is boosting expectations that a meaningful chunk of government IT operations will be shifted to a cloud computing model. Kundra discussed this prospect at an appearance Friday, saying the federal government is looking for "game-changing approaches" to deal with the problematic growth in data centers rather than "brute force consolidation."

“This is a huge opportunity to apply best practices from the private sector,” Kundra told Federal Computer Week. "It is a huge problem. The path we are on does not make sense."

Likely to Boost Data Center Demand
But the cloud model won't make sense for all federal applications. If recent consolidations by companies like HP and Intel are any indication, the drive for greater efficiency will render many of the current data center properties obsolete. Many older data facilities do not have the power capacity to support a highly-utilized equipment space. Consolidation also leads to higher densities, which are more difficult to cool in legacy facilities.

That means new data center space, most likely in northern Virginia and Maryland. Systems integrators and companies building cloud platforms have been among the players driving demand for data center space in northern Virginia, where demand has been strong and new supply has been limited. As the federal consolidation moves ahead, that demand is likely to increase as federal agencies identify new requirements.

The federal consolidation is also likely to be good news for server vendors, as consolidations usually include hardware refreshes to take advantage of the latest advances in computing power and energy efficiency.