/sites/all/themes/penton_subtheme_datacenterknowledge/images/logos/footer.png
Recent
Recent
New Malware Hides Inside Rogue Virtual Machines
Jun 02, 2020
For Citigroup, New Backup Site Could Be Employees’ Living Rooms
Jun 01, 2020
Top 10 Data Center Stories of the Month: May 2020
Jun 01, 2020
Top 5 Data Center Stories of the Week: May 29, 2020
May 29, 2020
Artificial Neural Networks Proving Their Worth in the Enterprise
May 28, 2020
Featured
Resilience in a Pandemic: Smaller Data Center Providers Hang On, Hold Fast
Jun 01, 2020
How the Data Center Technology Market Is Faring in the Pandemic
May 27, 2020
Microsoft Says It’s Built a Top-Five Supercomputer in the Cloud for AI
May 21, 2020
Rules Rewritten: Managing Data Centers Through the Pandemic
Apr 07, 2020
Cloud

Equinix: On-Ramp to the Cloud?

Equinix (EQIX) has seen a "meaningful increase in demand" from cloud computing providers looking to host their infrastructure. "We have a tremendous opportunity to connect the world's clouds through Equinix," said CEO Steve Smith. 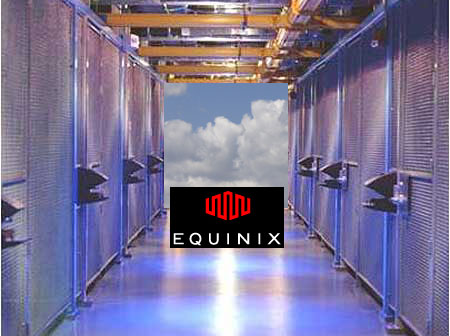 With the current enthusiasm about cloud computing, some have argued that cloud platforms will replace the data center, or reduce the need for physical infrastructure. Or perhaps that all the world's applications will run out of just five huge cloud computign facilities.

Here's the reality: Data center builders are the arms dealers to the cloud. Every cloud computing application will reside in a data center. And the cloud players who can't afford to build their own massive data centers will lease data center space and services from those who can. As a result, companies that are rarely mentioned in the cloud computing buzz are building a nice, cloudy business.

An example is Equinix( EQIX), the colocation specialist whose facilities are crucial intersections for major networks. Equinix, a company founded way back in the dot-com boom of 1998, reported this week that it has seen a "meaningful increase in demand" from cloud computing providers.

Serving & Connecting Cloud Providers
"We have a tremendous opportunity to connect the world's clouds through Equinix," said CEO Steve Smith. "We’re targeting several of these players to deploy their infrastructure with us and then provision the cloud offerings out of our data centers. We're going to be the on and off ramps to the cloud for a lot of providers."

Equinix offers colocation space - leased data center space where customers can house their servers and stroage, often in secure cabinets or cages - in 34 data centers. When the company completes its acquisition of rival Switch & Data, it will have a  global footprint of more than 6 million square feet of data center space in  facilities in North America, Europe and Asia-Pacific.

Equinix says it has has more than 120 customers that have deployed infrastructure to support both public and private cloud offerings. Recent wins include Amazon, Citrix Online, IPsoft and Zynga. Salesforce.com runs its entire infrastructure out of Equinix facilities in California, Virginia and Singapore.

Connectivity Central
Equinix data centers are where Internet companies and service providers make the physical connections between their networks, usually through traffic-swapping agreements known as peering. Any interruption in that high-speed bitstream would quickly ripple across the Internet.

That’s why the company’s data centers are supported by the industry’s sturdiest power and cooling infrastructure, with several levels of redundancy built into each system to ensure that power failures won’t knock servers offline. Visitors to Equinix data centers must pass through five layers of biometric security between the street and the servers. (See our video tour offering a look inside an Equinix data center). It's a level of resiliency and connectivity that's not easy to duplicate, especially for startups.

Equinix is hardly alone among old-school data center builders who are thriving on cloud-driven business. In 2010 Facebook was a huge customer for data center REITs Digital Realty Trust and DuPont Fabros Technology. Both Twitter/NTT and Facebook boosted growth at Fortune Data Centers.

One legacy of the company's having survived the dot-com bust is its experience managing through an economic downturn. Equinix has continued to invest in growth, expanding in 14 of the 18 markets where it operates.

"As the year unfolded and the demand for our services remained strong, we made an important decision to continue to invest in the core of our business to better position us to capitalize on our longer term opportunity," said Smith. "As many competitors were constrained in their ability to invest in their growth, we’ve now gained an important competitive advantage."

Strength in Financials
That includes the financial vertical, where Equinix has seens trong demand in its New Jersey and Chicago data centers from trading firms seeking high-speed access to exchanges.

"In the financial vertical we saw a significant increase in demand for our services with continued growth from our electronic trading communities," said Smith. "We now have over 430 customers in this vertical with over 80 deployed in multiple regions. We’ve seen accelerating growth in this ecosystem and annual contract value has increased 39% year-over-year. With the ongoing shift to electronic trading of multiple asset classes we believe that we’re in the early stages of growth in this ecosystem."