A coalition of data center companies and economic development groups is seeking to reinstate tax breaks that attracted major data center projects to the state, and express optimism that the effort will have improved legislative support. 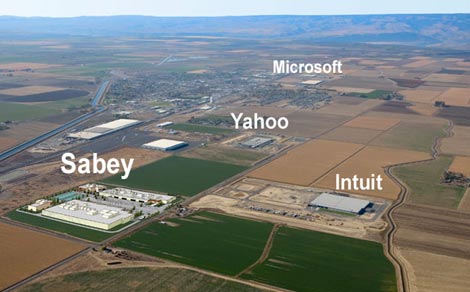 An aerial view of Quincy, Washington showing major data centers, including a visualization of a planned site for Sabey Corp. A coalition is seeking to reinstate tax breaks that helped develop the Quincy cluster. (Image: Sabey Corp.).

A coalition of data center companies and economic development groups is seeking to reinstate tax breaks that attracted major data center projects to the state, and express optimism that the effort will have improved legislative support.

The group, Washington Needs Jobs, last week hailed the introduction of two bills in the Washington Legislature (SB 6789 and HB 3147) that would allow a 15-month sales tax exemption on the purchase and installation of computers and energy for new data centers in rural counties.

The repeal of the tax benefits in November 2007 has slowed data center development in the state, which had seen a boom in mission-critical projects in 2006 and 2007. Microsoft cited the tax issue in its decision to migrate its Windows Azure cloud computing service out of Washington state. Meanwhile, rival Oregon is attracting major new projects, including a $188 million Facebook data centerin Prineville.

The Washington Needs Jobs coalition includes Microsoft, Yahoo, VMware, Sabey Corp. and Base Partners - which all have data center projects in the state - along with the Washington Technology Industry Association and the town of Quincy, Wash. The group says the impact of the tax decision on data center development is now clear.

"We are relatively optimistic about the bills' opportunity to pass," said Jim Kneeland of Washington Needs Jobs. "We've got a broader coalition than we have in the past. House leadership is on the bill this time, which is a very positive point. It has been recommended by the Department of Revenue, which recognizes that this is a potential net gain to government, rather than a loss."

The revenue impact of the bills is critical because state legislators must address a budget shortfall of more than $2 billion.

The tax controversy in Washington State erupted in December 2007 when attorney general Rob McKenna ruled that data centers were no longer covered by a state sales tax break for manufacturing enterprises because they “do not produce a product which is sold to the companies’ customers.”

Microsoft and Yahoo halted construction on their multi-facility data center campuses in Quincy while state legislators debated whether to reinstate the tax break, which was Microsoft and Yahoo relied upon in their decisions to build their Quincy projects. The legislative effort later stalled after local media characterized the bill as a $1 billion tax break for high-tech giants.

“The data centers have provided a significant boost to our economy while other rural areas have struggled,” said Curt Morris, President of the Port of Quincy, who said Quincy’s property-tax rate declined by 10 percent because of the broader tax base created by data centers from Microsoft and Yahoo.

“This legislation creates a window of opportunity to stimulate the economy in the short term with hundreds of badly needed construction jobs in Eastern Washington and, by restarting data center development in this state, to generate long-term high tech jobs and spur additional technology investment,” said Rep. Timm Ormsby, D-Spokane, the lead sponsor of the House version of the bill.

Kneeland said the state legislative session will last two months, and said the Washington Needs Jobs coalition would provide updates on the bills' progress on Twitter and Facebook.