Our response at the time: "When it comes to data centers, Jim Cramer is dumber than a bag of hammers." (See There's a Village Somewhere Missing an Idiot for the full story).

So how did Cramer's prediction turn out? If you sold all your data center stocks, you're probably regretting it. Nine of the 13 publicly-held companies we track in our Data Center Investor chart have gained in value since Cramer's Oct. 22 call, including five stocks with double-digit improvements in that short time. Those include Equinix (EQIX) and Switch and Data (SDXC), whose merger announcement prompted Cramer's prediction of Data Center Doom. 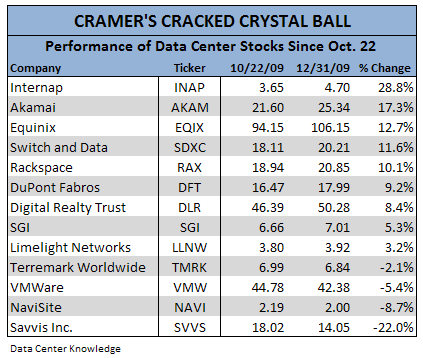 The data center hasn't yet been brought low by Nehalem processor technology, which Cramer warned would "make the data center model obsolete." Cramer completely ignored the data center sector as shares of these companies surged in value for most of 2009, discovering DuPont Fabros (DFT) in late September, long after its  shares surged from $2 to $13.

To be sure, data center stocks won't go higher forever, particularly after the stellar runup for the sector during 2009. But if you're interested in understanding the industry and its future, take the time to understand the factors that are driving the demand for data center space, and how technology is impacting these facilities and their design. As we noted in our October post, Nehalem processors will allow companies to do more with less, but they’re not going to empty out all the data centers.