<img src="/sites/datacenterknowledge.com/files/wp-content/uploads/2010/01/mozilla-growth1.jpg" width="470" height="340" /> Mozilla has added a second major data center in Phoenix to accommodate the growth of its popular open source software projects. The new servers for Firefox and Thunderbird will live at Phoenix ONE, one of the world's largest data centers. 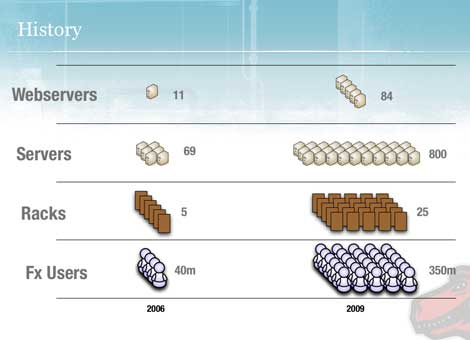 This chart from Mozilla shows the growth of its infrastructure since 2006.

Mozilla has added a second major data center in Phoenix to accommodate the growth of its popular open source software projects, especially the Firefox web browser and Thunderbird e-mail client. The non-profit corporation will house six racks and about 80 servers at the mammoth Phoenix ONE data center operated by i/o Data Centers.

The expansion space in Phoenix will support Mozilla's primary data center in San Jose, Calif., with production apps running in both locations. The project also has smaller satellite facilities in Amsterdam and Beijing.

Infrastructure for 350 Million Users
"Since 2006, we’ve tripled the amount of data center floor space (and tripled our IT/Ops team), grew our user base 8.75 times and now push 18x the bandwidth," Matthew Zeier from the Mozilla operations team wrote in a blog post. "Sure, in comparison to other sites, this growth is small. It’s no Facebook. But it’s still a significant amount of infrastructure that supports 350 million users and the world’s most popular web browser (we’re at about one engineer to 43.7m users (or one to 800 servers)."

Mozilla's Phoenix servers will reside in one of the world's largest data centers, providing plenty of headroom for expansion as the user base for open source software continues to grow.

Phoenix ONE is a 538,000 square foot facility that integrates solar power and thermal energy storage. The facility, which opened last June, features 180,000 square feet of raised floor space in its first phase. i/o Data Centers has already begun construction on phase II of the data center, which will also be 180,000 square feet.

Use of Solar Power, Thermal Storage
Phoenix ONE is building out an enormous rooftop array of solar panels, which will eventually generate as much as 4.5 megawatts of power for the data center – nearly three times the capacity of Google’s rooftop solar array at its California headquarters. A thermal storage system will allow i/o Data Centers to run chillers for its cooling systems at night, when power rates are lower, and then store cold water for use during daylight hours. (See An Inside Look at the Phoenix ONE Data Center for more).

While power management is critical for data center operators, Zeier said Mozilla had three key items on its checklist:

"Without #1 (or even #2), game over man," Zeier wrote. "Carrier neutral data centers are king, Ethernet hand-offs rule and the question is less about how much space I need than it is about how much power I need. i/o Data Center met all three of these requirements and is an easy 'day trip' away. By the end of March we will have a number of our most popular websites and services focused on delivering Firefox running out of both San Jose and Phoenix."