The Data-Crunching Powerhouse Behind 'Avatar'

<img src="/sites/datacenterknowledge.com/files/wp-content/uploads/2009/12/wetadigital-470.jpg" width="470" height="416" /> It takes a lot of rendering horsepower to create the stunning visual effects behind blockbuster movies like James Cameron's new Avatar. Here's a look at the high-density data center in New Zealand where Weta Digital brings the mythical worlds of Middle Earth and Pandora to life. 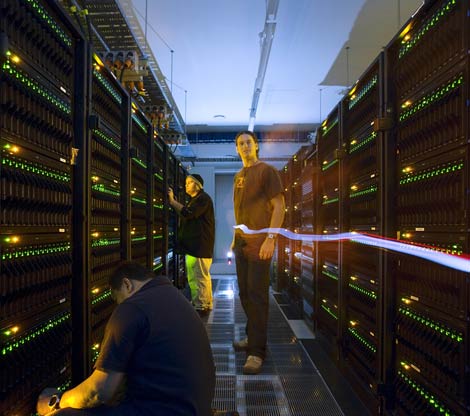 A look at some of the high-density server and networking gear inside the Weta Digital data center used to render the animation for the new James Cameron movie "Avatar." (Photo: Foundry Networks Inc.)

It takes a lot of data center horsepower to create the stunning visual effects behind blockbuster movies such as King Kong, X-Men, the Lord of the Rings trilogy and most recently, James Cameron's $230 million Avatar.  Tucked away in Wellington, New Zealand are the facilities where visual effects company Weta Digital renders the imaginary landscapes of Middle Earth and Pandora at a campus of studios, production facilities, soundstages and a purpose-built data center.

The 10,000 square foot server farm manages thousands of work orders and a serious amount of data. Information Management magazine reports on the creative artists and rendering done for the movie, as well as the thoroughbred data center supporting it.

The Weta data center got a major hardware refresh and redesign in 2008 and now uses more than 4,000 HP BL2x220c blades (new BL2x220c G6 blades announced last month), 10 Gigabit Ethernet networking gear from Foundry and storage from BluArc and NetApp. The system now occupies spot 193 through 197 in the Top 500 list of the most powerful supercomputers.

Thirty four racks comprise the computing core, made of 32 machines each with 40,000 processors and 104 terabytes of memory. Weta systems administrator Paul Gunn said that heat exchange for their servers had to be enclosed. The "industry standard of raised floors and forced-air cooling could not keep up with the constant heat coming off the machines," said Gunn. "We need to stack the gear closely to get the bandwidth we need and, because the data flows are so great, the storage has to be local." The solutions was the use of water-cooled racks from Rittal.

Gunn also noted that tens of thousands of dollars were saved by fine tuning the temperature by a degree.  Weta won an energy excellence award recently for building a smaller footprint that came with a 40 percent lower cooling cost for a data center of its type.

For the last month or more of production those 40,000 processors were handling 7 or 8 gigabytes of data per second, running 24 hours a day. A final copy of Avatar equated to 17.28 gigabytes per minute of storage. For a 166 minute movie the rendering coordination was intense.

Based on the #avatar Twitter hash tag comments I would say the visual effects are a success.

We previously discussed the Weta Digital facility last year in One Data Center to Rule Them All.