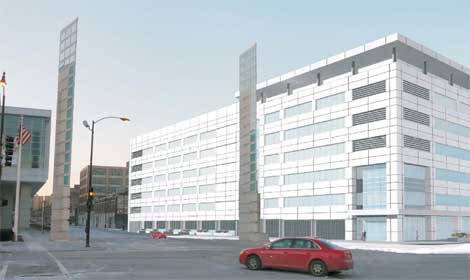 A design concept for a six-story, 300,000 square foot data center in Chicago proposed by McHugh Construction.

The project revives a plan for a data center at the site, which was first proposed in 2001 but shelved after the dot-com bust left an oversupply of data center space. In 2008 McHugh tried to sell the site for possible use as a hotel or entertainment complex to support the convention center. But the credit crunch made it difficult to finance those types of projects, and with demand for data center space in downtown Chicago remaining strong, McHugh revisited the data center concept.

Supply Running Low
A likely factor in the decision is the dwindling amount of space remaining at 350 East Cermak, which spans 1.1 million square feet but is 95.9 percent occupied as of Sept. 30, according to Digital Realty. The only other building in downtown Chicago with space for large footprints available is the CoreSite building at 427 South LaSalle Street.

The supply of data center space in downtown Chicago is running low at a time when demand remains strong, driven largely by financial firms' appetite for additional capacity for fast-growing electronic trading operations.

The planning board has not yet considered McHugh's proposal, which seeks to reduce the number of required parking spaces at the site from 156 to just 20, reflecting the lower foot traffic at data centers. But McHugh has outlined details of the project in meetings with community leaders. Architectural drawings show that McHugh hopes to gain certification under the LEED (Leadership in Energy and Environmental Design) program for energy efficient buildings.

Design Features Louvers, Solar Power
The design drawings include louvers along the side of the building, a feature often used to support fresh air cooling. The plans calls for a rooftop solar power installation, with about 8,300 square feet of photovoltaic panels. That's not large enough to cover the power requirements of most data center tenants, but could help earn LEED points for on-site generation and be attractive to companies grooming their power footprints to add more renewable sources.

The drawings also feature a "green roof" with vegetation covering about 10,000 square feet. The design calls for diesel generators to be housed inside the lower floor, which will reduce the noise profile of the building, which is often a concern for large data centers in densely-populated urban areas.

McHugh had its headquarters on the property from 1970 to 2002, when the company moved to 1737 South Michigan Ave.