2012: No Apocalypse, but Space Weather Threat?

The year 2012 will bring the next peak of an 11-year cycle of solar activity, which can produce sunspots and solar flares that can interfere with satellite and radio communications on earth. Is your data center ready? A look at some common-sense preparations. 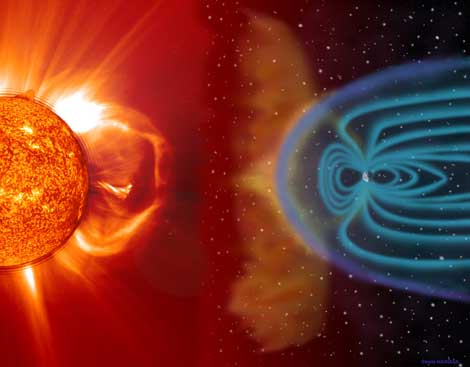 This NASA diagram depicts solar radiation storms interacting with the magnetic fields surrounding the earth, which can disrupt power grids and communications.

What does 2012 hold in store? Will the supposed end of the Mayan calendar trigger a global apocalypse? Or perhaps something slightly tamer, like huge storms on the surface of the sun sending waves of "solar wind" hurtling towards earth to disrupt our communications and power grids?

This week Hollywood hopes the first scenario will sell a lot of movie tickets to its disaster film "2012" starring John Cusack. The second scenario, however, isn't as far-fetched as you might think. In fact, there's enough science involved that data center operators are being encouraged to educate themselves about the issue.

The year 2012 will bring the next peak of an 11-year cycle of solar activity, which can produce sunspots and solar flares that can interfere with satellite and radio communications on earth. The most significant potential impact is to power grids, which are susceptible to disruptions during these magnetic storms.

A Real Threat to Power Grids
A solar storm during the 1989 caused the entire Hydro-Quebec power grid to fail, leaving millions of residents of northeastern Canada without power for up to nine hours. The event also caused a transformer failure at a nuclear power plant in New Jersey.

Is space weather a threat to your data center? Eric Gallant of Lee Technologies has been working to raise awareness of the 2012 sunspot cycle, so data center operators can assess the risk and determine whether additional steps are needed to protect their power and communications infrastructure.

Similar to Hurricane Prep
Contingencies for space weather are "really similar to things you do for hurricane or other disaster," Gallant says. That includes ensuring that you have well-maintained backup generators, an adequate supply of diesel fuel, and fuel supply agreements in place to cover an extended outage.