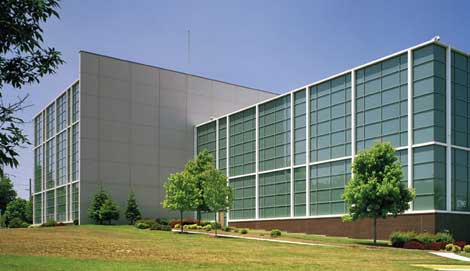 The DuPont Fabros Technology VA3 data center in Reston, Va., where the company has signed two leases to quickly fill space that will be vacated at year-end.

What a difference a year makes. As 2008 drew to a close, DuPont Fabros Technology was struggling. Facing the brutal headwinds of the credit crisis, the data center REIT's stock had slipped to an all-time low of less than $2 a share after the company halted three development projects amid financing challenges.

Twelve months later, even as the economy continues to struggle, the outlook for DuPont Fabros has been transformed. In 2009 the company has signed 12 leases representing more than $700 million in contract value, gaining commitments for more than 187,000 square feet of data center space. In the third quarter DuPont Fabros opened the doors for first phase of ACC5, one of the projects that had been mothballed last November.

Four New Leases in Virginia
DuPont Fabros (DFT) reported its third quarter earnings late Tuesday, including four previously undisclosed leases in Northern Virginia. Significantly, the company was able to quickly fill space that was being vacated in its VA3 data center in Reston, Va. The deals continue the torrid pace of leasing in Northern Virginia, which is currently the most active market in the nation.

Space at the Reston facility representing 2.5 megawatts of critical load was to become available upon lease expirations on Dec. 31. DuPont Fabros said today that it had successfully filled the space with two leases, one for 1.95 megawatts and another for 0.6 megawatts.

More leasing at ACC5
The company said it also signed two leases at ACC5 Phase I in Ashburn, representing 2.84 megawatts of crticial load and 13,700 square feet of raised-floor space.

"During the third quarter, we continued to focus on leasing and operations, and are pleased with the progress made," said Hossein Fateh, President and CEOf of DuPont Fabros. "Looking ahead, a principal objective will be raising the funds necessary to start the next two developments in early 2010 in order to capitalize on market demand for our product."

The company said it is actively pursuing additional funds for both the ACC5 Phase II in Ashburn, Virginia and NJ1 Phase I in Piscataway, New Jersey developments.

DuPont Fabros also hinted at news on the restoration of a dividend. "The company has increased its 2009 REIT dividend requirement estimate by $0.04, and the payment range is now $0.24 to $0.30 per share," it said. "The company has available funds sufficient to pay the dividend in cash, and the Board of Directors will determine the method and timing of the dividend prior to the end of the fourth quarter."