With carbon regulation looming on the horizon, companies with extensive data center operations are taking a harder look at the origin of their power, and its implications in a regulated environment. 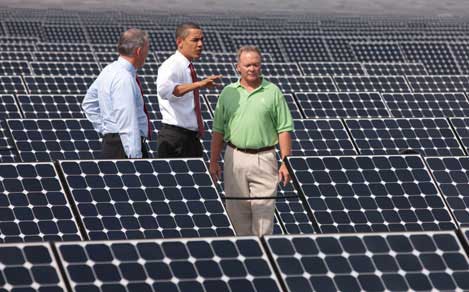 With carbon regulation looming on the horizon, companies with extensive data center operations are taking a harder look at the origin of their power, and its implications in a regulated environment.

“The biggest part of our carbon footprint is the amount of electricity used to power the IT equipment in our data centers,” said Christina Page, the Director of Climate and Energy Strategy at Yahoo. "All electrons are not created equal."

Companies like Yahoo are seeking to use less power and buy a larger percentage of their energy from renewable sources such as hydro, wind and solar power. In most cases, that means building or leasing data centers in locations where utility providers offer renewables in sourcing their electricity.

The Bully Green Pulpit
The issue is coming into focus for data center operators as the President Barack Obama has used a series of media events - including a visit of MIT last week and this week's tour of a Florida solar power facility - to ramp up discussion of his cap-and-trade plan for regulating carbon emissions in the U.S.

“We look at this potential for regulation as opportunity rather than a harbinger of doom," said Mark Thiele, director of business operations for R&D at VMware. "Carbon right now is at the top of the hype cycle. The reality is about efficiency, and saving our companies money. Those of us who care about the environment now have a stick to wield.”

Energy Efficiency: Job One
The immediate opportunity is in funding efficiency projects, or as Thiele puts it, "how we own what we already have.” There is evidence that efforts to improve the energy efficiency of data centers are extending beyond the largest providers, whose huge power bills have made efficiency a business imperative.

Yesterday the data center trade group AFCOM reported that 71 percent of its members are pursuing energy efficiency projects. But barriers remain. "I really surprised that 22 percent tof our members reported that they haven't gotten a commitment (on energy efficiency projects) from senior management," said Jill Eckhaus, the president of AFCOM. "The data center sucks a lot of energy, so it's being looked at in a big way."

Hydro, Solar Implementations
VMware and Yahoo are among the companies that have built data centers in central Washington, where the local utility power is almost exclusively hydro power from dams on the nearby Columbia River. Hydro is desirable because it is both green and affordable.

As innovation is gradually whittling down the cost of renewable energy, the disparity between renewables and coal may also be altered by regulation. The EPA's Ben Machol said pending legislation will not just boost renewable energy sources, but could also have cost implications for utilities that relay heavily on coal in their power generation.

Higher Pricing for Coal?
“Coal plants would need to put in controls for greenhouse gases," he said. "What that will mean for data centers is primarily prices going up. In an environment of rising power prices, energy efficiency will pay back very quickly. It’s a no brainer."

While some attendees at the SVLG event were critical of the potential for regulation to increase the cost of coal-based power, others said the industry needs to consider a broader context for the issue. "Dirty electricity is already expensive," said John Stanley of the Uptime Institute. "It only looks cheap.”