Complaints of a "broken IPv6 Internet" a the NANOG mailing list surfaced an IPv6 peering issue between Hurricane Electric and Cogent Communications. 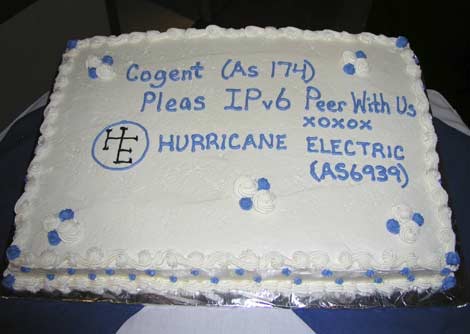 To address an IPv6 peering dispute, Hurricane Electric baked a cake with a message for Cogent Communications. The cake was devoured by hungry network professionals at the NANOG 47 meeting.

IPv6 is the next generation of the Internet Protocol, and will dramatically expand the number of addresses available for web sites, as well as millions of mobile devices with Internet access. Although the transition will address some of the network's challenges, others will clearly persist. That includes disputes over peering, which have quickly made the jump from IPv4 to IPv6.

Complaints of a "broken IPv6 Internet" emerged last week on the North American Network Operators Group mailing list, which surfaced a peering issue involving IPv6 connections between Hurricane Electric and Cogent Communications. That prompted a response from Hurricane's Mike Leber, who blamed Cogent for the difficulties.

"If you've been around long enough, you'd know that normally nobody talks about peering publicly like this," Leber wrote. "Then why would I write this post? Because I want to set the record straight regarding Hurricane Electric's IPv6 peering goals, and nothing in Cogent's case seems to get through to them."

Cogent had less to say its relationship about Hurricane Electric. "It is public knowledge that our networks are connected," said Travis Wachter, the Marketing Communications Manager for Cogent. "As for peering agreements, we cannot discuss them publicly as we have non-disclosure agreements in place."

Traffic Swapping
Peering allows two providers exchanging large volumes of traffic to save money by connecting directly, rather than routing traffic across their paid Internet connections. Peering is often free as long as the amount of traffic exchanged is not out of balance, providing substantial cost savings for bandwidth for high-traffic sites and networks.

Cogent has been involved in a number of high-profile peering disputes over the years, including de-peerings that disrupted IPv4 connectivity with Sprint, Telia and Limelight Networks.

Hurricane Electric has invested time and money in staking out an early position as an IPv6 compliant network. "We are a Tier 1 IPv6 backbone," said Martin Levy, Hurricane Electric's Director of IPv6 Strategy. "If there is another player that comes into v6, we set up peering. We continue with our offer to Cogent to turn up peering with him. The community in general has looked at us and given us the vote of approval."

A Cake-Shaped Olive Branch
While Hurricane Electric pointed the finger at Cogent, it has also extended an olive branch. Leber's NANOG post commented that "we stop short of baking cakes" to encourage peering. But at this week's NANOG 47 meeting in Dearborn, Mich., Hurricane Electric presented a cake inscribed with an invitation to Cogent to peer with HE over IPv6.

"At Hurricane Electric, we want v6 to be successful and have spent a lot of time evangelizing it," Levy explained. "If our competitors don't want to do anything, so be it. Turning up v6 has been good for us. It has fundamentally changed our business. But the same problems that exist in the v4 world will exist in the v6 world."