The data center project in the island nation of Mauritius in the Indian Ocean plans to develop a system to use sea water air conditioning (SWAC) to support data center tenants. 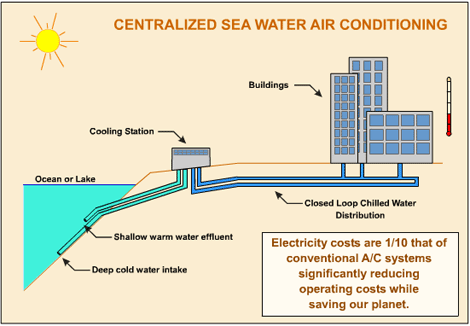 Can the island nation of Mauritius become an international data center hub? Economic development officials in the island chain in the western Indian Ocean believe that Mauritius can become a key hub connecting Africa, Asia and the Middle East. A key part of that pitch is the ocean itself, and its potential to help data center operators slash their cooling costs.

The Eco-Park plans to build a system of pipes that will extend two miles offshore and as much as 1,000 meters (3,200 feet) beneath the ocean surface, where the water is about 40 degrees Fahrenheit (5 degrees C). The cold water will be piped back to the data center complex and used in the facility's cooling system, eliminating the need for power-hungry chillers.

Approach Used in Other Industries
SWAC "hasn't been used in the data center world thus far," said Steve Wallage of the Broad Group, a UK consultancy focused on the data center sector. "It has some history with other kinds of facilities in places like Hawaii and Sweden." A number of projects use cold water from large fresh water lakes for cooling, including Cornell University in Ithaca, N.Y., whose Lake Source Cooling project uses water from Lake Cayuga. UPDATE: The city of Toronto also has a deep lake water cooling system.

"Often there's resistance to alternative power and cooling systems, but the technology is fairly mature," said Wallage. "You tend to have a high up-front cost in the pipe work, but the long-term savings is in the 75 to 90 percent range on the cooling build." That's consisent with results at Cornell, which says it uses 86 percent less power than when it used chillers.

Vendors Focused on Mauritius' Ambitions
The Mauritius EcoPark is working with Makai Ocean Engineering on the sea water air conditoning project. But it's not the only company that has taken an interest in Mauritius effort to attract data centers. Executives from APC by Schneider, Fortress International and CB Richard Ellis will speak at the Data Centre Strategies Mauritius conference on Sept. 30, which is organized by Broad Group.

“Mauritius is ideally positioned at the crossroads of Africa, Asia and Australia and outside major earthquake ridges,” commented Philip Low, managing director at BroadGroup. “The island is also well known as a major financial and infocom hub. Being relatively remote but well-connected to the world is a major attribute for the island-nation to position itself as a disaster recovery and business continuity destination.”

Cable May Help Connectivity
Wallage said connectivity in Mauritius, which has been an issue in the past, has been significantly improved by the construction of new undersea cables. Power prices run in the neiughborhood of 10 cents per kilowatt hour - one reason why the power reduction from the sea water air conditioning plan looms large in the island's development plans.

Mauritius isn't the first island nation to try and build a reputation as a data center hub. Iceland has been marketing itself as a data center destination, touting its abundant supply of geothermal energy. Those prospects have been complicated by the country's banking crisis last fall.