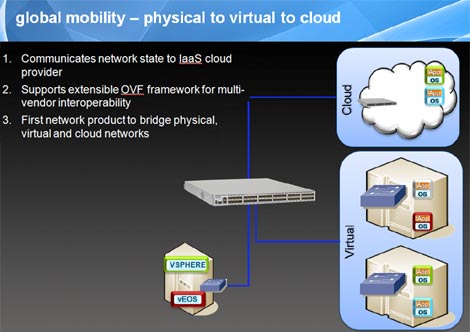 A diagram of how the Arista Networks vEOS manages assets across physical, virtual and cloud environments.

The network of the future will be one on which virtual machines move around the data center, and between the data center and the cloud. This vision is at the heart of a new offering from cloud networking specialist Arista Networks, which today unveiled details of its new networking software to ease virtual machines' the journey across physical, virtual and cloud assets.

Arista's vEOS (virtualized Extensible Operating System) is an implementation of the company's technology that manages VMware vNetwork distributed switches, linking physical and virtual machines to network policy and profiles. vEOS is a single system image that runs on Arista 7000 switches and as a VMware virtual appliance, which works with VMware vSphere 4 to make workloads mobile, preserving networking state and policy as virtual machines move around data centers and into the cloud.

Managing the Converged Network
"With vEOS, Arista and VMware customers will now be able to more easily manage their growing converged networking infrastructure and enable easier mobility of virtual machines," said Jayshree Ullal, president and CEO of Arista Networks, who provides additional details in a blog post. "Arista’s vEOS is fully compatible and capable of co-existing with the VMware vSphere 4 vNetwork Distributed Switch while providing consistent administrative experience to both the network and virtualization operator."

Arista is rolling out its new offering ahead of next week's VMWorld 2009 conference. In the race to equip the next-generation data center, Arista is competing with another prominent VMware partner, Cisco Systems (CSCO), which is targeting the same VM-enabled converged network.

Familiar Rivals
The two networking rivals  know one another well. Ullal oversaw Cisco's Data Center 3.0 push before moving to Arista, and she was recently joined by Cisco alums Doug Gourlay (VP of Marketing) and Anshul Sadana (VP of Systems Engineering).

While Cisco has developed its own Nexus 100V virtual switch, Arista has opted to work with VMware's virtual switch. Gourlay noted that this decision offers some tradeoffs (broader compatibility but some "feature gaps").

But a key area where Arista hopes to differentiate its offerings is pricing. Rather than basing its pricing on the number of switches or VMs being managed, vEOS uses a one-time licensing fee of $5,000. Arista will offer a free version that allows administrators to visualize VM assets across physical and virtual boundaries, which will integrate with IBM Tivoli and HP OpenView software.

While the free version will allow admins to see all those assets, they'll need to purchase the license to manage them. While vEOS will work with other company's switches, Arista switches are needed to enable key features like distributed port profiles.

vEOS will be available in the fourth quarter of 2009. Arista is accepting applicants for the open-beta of vEOS, which begins in October.