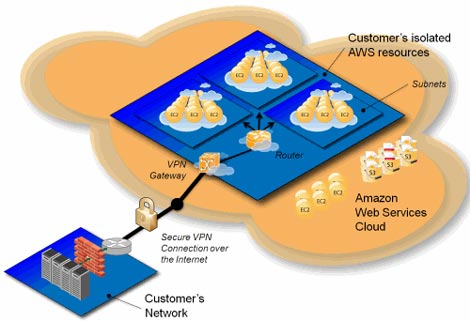 A diagram of Amazon Virtual Private Cloud and how it connects cloud-based resources to existing private networks.

Amazon Web Services has introduced Amazon Virtual Private Cloud (VPC), which allows companies to connect a set of Amazon EC2 instances with a corporate data center using a virtual private network (VPN) connection over the IPsec protocol. This offers a "cloudbursting" capability that allows enterprises to quickly expand the capacity of in-house applications while buying the extra capacity on a "pay as you go" usage-based model. The Amazon installation serves as an extension of the private network, as the EC2 instances within the VPC have no Internet-facing IP addresses. Amazon VPC is in limited beta and accepting applications.

Here's a roundup of information and commentary about the new Amazon Virtual Private Cloud: