Where do budget-conscious startups host their sites?Rackspace, SoftLayer and Amazon are the leading choices among Y Combinator companies, according to an analysis posted on Github. 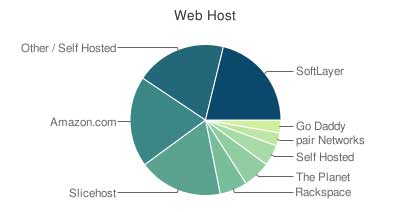 Where do budget-conscious startups host their sites? The Y Combinator venture incubator, renowned for its "ramen profitable" approach to bootstrapping new enterprises, provides an interesting case study. Rackspace, SoftLayer and Amazon are the leading choices among Y Combinator companies, according to an analysis posted on Github.

Sixteen of the 67 startups at Y Combinator host their sites at Rackspace, with 12 using Slicehost/Cloud Servers while four others used Rackspace's managed hosting services. Fourteen host with SoftLayer, a Dallas-area dedicated hosting specialist that also offers a CloudLayer suite of cloud computing services. Another 13 companies use Amazon Web Services to host their sites.

Startups are widely perceived as favoring cloud computing for its affordability and scalability. Yet even among the Y Combinator stable of budget-sensitive startups, established hosting companies wind up hosting most sites.

Are new cloud providers less of a threat to traditional hosts than the hype might suggest? The results from Y Combinator show that old-school hosting powerhouses are dominating, either by winning business directly or (in the case of Rackspace and Slicehost) acquiring growing cloud providers.

Once you look beyond the hosting data, the survey shows huge traction for services from Go Daddy, which is far and away the leading domain registrar and also the provider of choice for SSL certificates.

See this Inc. profile for more on Y Combinator and its approach to startups.