Microsoft is migrating its Windows Azure cloud computing infrastructure from a Quincy, Wash. data center to a facility in San Antonio, citing the state of Washington's tax policies for data centers. 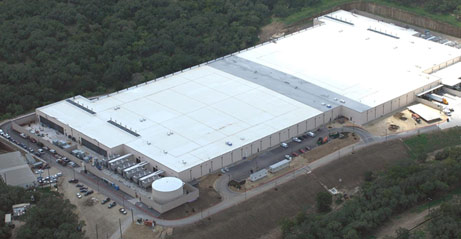 Microsoft is shifting its Windows Azure platform from Quincy, Washington to the company's data center in San Antonio, pictured above.

Microsoft is migrating its Windows Azure cloud computing infrastructure from its data center in Quincy, Washington to another Microsoft facility in San Antonio, Texas. The reason: Microsoft's unhappiness with tax policies in Washington state, which ruled last year that data centers were no longer covered by a sales tax break for manufacturers.

Without the tax break, Microsoft (MSFT) would pay a 7.9 percent tax on all new data center equipment. Since Windows Azure will require thousands of additional servers once it launches, those costs would add up quickly.

"Due to a change in local tax laws, we’ve decided to migrate Windows Azure applications out of our northwest data center prior to our commercial launch this November," Microsoft say on its Windows Azure blog (link via OakLeaf Systems). " This means that all applications and storage accounts in the “USA - Northwest” region will need to move to another region in the next few months, or they will be deleted." Azure applications will shift to the USA - Southwest region, which is housed in Microsoft's 470,000 square foot San Antonio data center, which opened last September.

The move underscores how the economics of data center site location can change quickly - and how huge companies are able to rapidly shift operations to chase the lowest operating costs.

The tax controversy in Washington State erupted in December 2007 when attorney general Rob McKenna ruled that data centers were no longer covered by a state sales tax break for manufacturing enterprises because they "do not produce a product which is sold to the companies’ customers.”

Microsoft and Yahoo halted construction on their multi-facility data center campuses in Quincy while state legislators debated whether to reinstate the tax break, which was Microsoft and Yahoo relied upon in their decisions to build their Quincy projects. The legislative effort later stalled after local media characterized the bill as a $1 billion tax break for high-tech giants.

A Cost-Driven Data Center Cluster
Quincy is a magnet for data centers because of its abundant supply of cheap, “green” hydro power generated by area dams. Microsoft pays just 1.9 cents per kilowatt hour for its power in Quincy, compared to rates of 12 cents an hour in Silicon Valley and even higher in the New York market. Ask.com, Intuit, Sabey Corp. and Base Partners have also built or announced data center projects in central Washington.

In rejecting calls to reinstate the tax breaks, legislators appeared to be betting that Microsoft's threats to shift operations to other states was a negotiating ploy, rather than an action plan. If so, Microsoft has called their bluff.