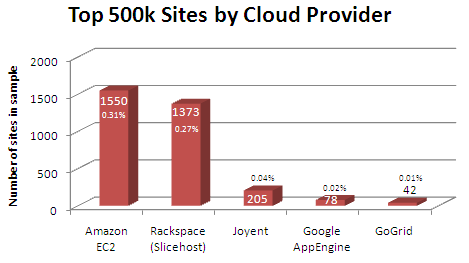 Last month we noted research from InfiBase that found that 1,422 of the top 500,000 web sites are hosted at Amazon EC2. This month InfiBase has expanded that research to compare Amazon with other cloud providers.

The surprise: Despite its critical mass, Amazon is not that far ahead of Rackspace Cloud Servers (formerly SliceHost). Amazon EC2 now hosts 1,550 of the top 500K sites, compared to 1,373 for Rackspace Cloud Servers. Joyent is next with 205 sites, followed by Google App Engine (with a suprisingly low 78 sites) and GoGrid (42).

As so often happens with cloud computing, there's room for debate about definitions and whether apples are being compared with oranges. Guy Rosen of InfiBase writes that Cloud Servers is competitive with EC2, but effectively a virtual private server hosting service that now charges on an hourly basis rather than a monthly flat fee.

"Imagine GoDaddy rebranded their VPS/hosting services as 'cloud' – they’d blow the others right out of the water," Rosen writes. "GoDaddy comprises 6.2% of our sample – almost 20 times the size of Amazon EC2!"

"Based on this line of thinking, EC2 is also effectively a Xen based VPS offer," Sayegh writes. "In our view, Cloud is a set of 'pooled' computing resources, that is delivered over the web, and that is powered by software. Both EC2 and Rackspace Cloud Servers fit that definition. I can tell you this, there are oodles of people launching servers on demand to scale, doing bursty workloads, paying utility by the hour, and loving it on Cloud Servers. If that is not Cloud, then what is?"

InfiBase found that Amazon EC2 had monthly grwoth of 9 percent among the top 500K sites, with 178 new sites migrating to EC2 (including GossipGirls.com) while 50 sites departed EC2 for other providers.