Texas startup Baryonyx Corp. plans to build a wind-powered data center powered by energy from wind farms" in the Texas panhandle and the Gulf of Mexico. 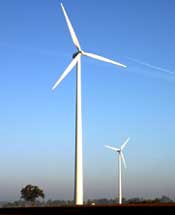 A Texas startup plans to build a data center powered by energy from huge "wind farms" in the Texas panhandle and the Gulf of Mexico. Baryonyx Corp.has been awarded three wind energy leases for 8,000 acres onshore in Dallam County, Texas and another 38,000 acres in the Gulf of Mexico, the company said. Baryonyx has also acquired 8 acres of land in Stratford, Texas for its data center project.

Baryonyx was formed in May to build data center projects powered by renewable energy resources. Its primary focus will be wind energy, but the company is also developing plans to eventually use hydrogen fuel cells and solar power to support its facilities when  wind generation ebbs due to weather conditions.

The project is the most ambitious effort yet to harness wind power to provide electricity for data centers. Green House Data has built a 10,000 square foot facility in Cheyenne, Wyoming that runs primarily on wind energy, while Microsoft has demonstrated wind-powered containers packed with servers.

100 Turbines for Data Center
Baryonyx plans to build a 28,000 square foot data center in Stratford, which will be powered by 100 wind turbines built on the adjacent land that will generate up to 150 megawatts of power. Each of the turbines will be able to generate up to 3.3 megawatts of power. Capacity not needed by the data center will be sold to local utilities. Baryonyx said it will take about 3 years to reach the operational phase for the wind-powered data center.

The second phase is the offshore wind farms, which will feature up to 450 wind turbines, which are each 300 feet tall and capable of generating 6 megawatts of power. Baryonyx was the high bidder in a July 14 lease sale by the Texas General Land Office. Baryonyx will pay a "nominal fee" to lease the two offshore areas for wind development.

Leases Support Texas Schools
Once the wind farms are built and producing energy, they will pay royalties to the state's Permanent School Fund that in the form of power, with royalites commencing at 3.5 percent of production and scale to 6.5 percent by the 17th year of the lease. The General Land Office will resell the electricity to Texas schools, prisons and cities, with the procees going to the school fund. "

Baryonyx' management team features energy industry veterans, most of whom hail from the UK.