IBM and the Swiss Federal Institute of Technology Zurich (ETH) have unveiled plans for a new water-cooled supercomputer that will reuse excess heat in the university's buildings. 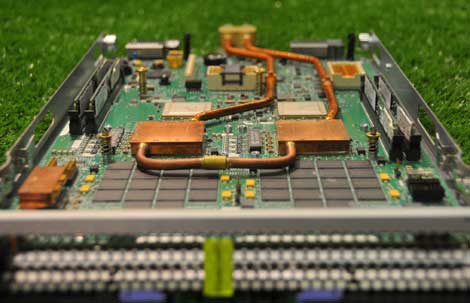 IBM and the Swiss Federal Institute of Technology Zurich (ETH) have unveiled plans for a new water-cooled supercomputer that will reuse excess heat in the university's buildings. The new Aquasar system is expected to decrease the carbon footprint of the system by up to 85 percent.

The system is the result of a collaboration between ETH and IBM scientists on chip-level water-cooling and energy reuse. The supercomputer will consist of two IBM BladeCenter servers in one rack and will have a peak performance of about 10 Teraflops. Each of the blades will be equipped with a high-performance liquid cooler on each processor, as well as input and output pipeline networks and connections, which allow each blade to be connected and disconnected easily to the entire system (see photo above).

The entire cooling system is a closed circuit: the cooling water is heated constantly by the chips and consequently cooled to the required temperature as it passes through a passive heat exchanger, thus delivering the removed heat directly to the heating system of the university in this experimental phase. This eliminates the need for energy-hungry chillers.

"This project is a significant step towards energy-aware, emission-free computing and data centers," explains Dr. Bruno Michel, Manager Advanced Thermal Packaging at IBM's Zurich Research Laboratory. "If we capture and transport the waste heat from the active components in a computer system as efficiently as possible, we can reuse it as a resource, thus saving energy and lowering carbon emissions."

Aquasar will be used by the Computational Science and Engineering Lab of the Computer Science Department at ETH Zurich, for multiscale flow simulations for its research in nanotechnology and fluid dynamics. 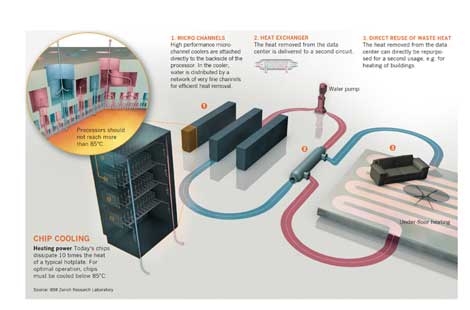