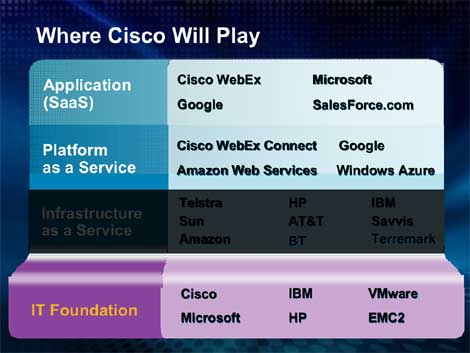 Recent news that Cisco Systems is building a large data center in Texas raised questions about the extent of the company's ambitions in cloud computing. This morning the company outlined its cloud roadmap, which focuses on service-as-a-service (SaaS)  and platform-as-a-service (PaaS) offerings featuring its WebEx collaboration solutions.

Cisco (CSCO) doesn't have plans to launch a cloud infrastructure offering, according to chief technical office Padmasree Warrior, noting that many of Cisco's key customers and partners occupy that layer of the cloud computing stack. The subtext of the presentation from Cisco Live! is that Cisco can serve as the equipment "arms dealer" at the Infrastructure-as-a-Service (IaaS) layer, where existing players like Savvis and Terremark are already offering services atop elements of Cisco's Unified Computing System (UCS).

Cisco outlined plans to offer more services built around WebEx, including some that will integrate with the company's TelePresence video conferencing system. Saving video files from online presentations and collaboration sessions requires considerable storage, according to Doug Dennerline, senior VP for Software Collaboration at Cisco, who said the company may consider offering an online backup and storage service tied to WebEx.

The growth plans for WebEx and the WebEx Connect platform are likely part of the reason that Cisco recently filed plans to build a $184 million data center in Allen, Texas. Cisco’s plans call for a 140,000 square foot data center, which could eventually be expanded to 350,000 square feet. Construction is slated to begin early next year and take 18 to 24 months to complete.