Microsoft (MSFT) will open two new data centers in July in Dublin, Ireland and Chicago, following through with a massive expansion of its data center capacity to support the company's push into online services. 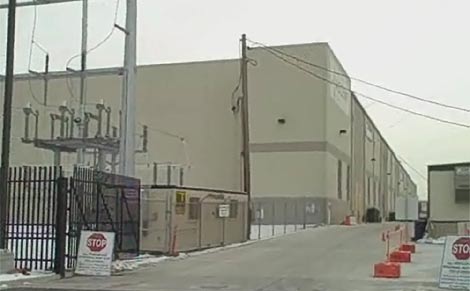 The huge Microsoft data center in Northlake, Illinois will open on July 20, the company said today.

Microsoft will open two new data centers in July, following through with a massive expansion of its data center capacity to support the company's push into online services. The two new facilities in Dublin, Ireland and Chicago will add more than 1 million square feet oif space to the company's data center network.

The Dublin, Ireland data center will go live this Wednesday, July 1, followed by the Chicago data center on July 20. The two launches indicate that Microsoft has resumed its data center expansion after announcing a construction slowdown earlier this year. In January, Microsoft said it would postpone its planned data center in West Des Moines, Iowa and would bring Dublin and Chicago online “as customer demand warrants” based on quarterly reviews of data center capacity.

The Dublin data center is the first "mega-data center" Microsoft has built outside the U.S. The 303,000 square foot first phase of the building will be supported by 5.4 megawatts of electricity and have a Power Usage Effectiveness (PUE) rating of 1.25, the company said. The $500 million project will eventually include about 550,000 square feet of space.

Free Cooling in Dublin
A key focus of the Dublin facility is the use of outside air to cool the facility and servers, a process known as free cooling or air-side economization. Instead of using chillers or cooling towers, rooftop air handling units drop outside air down into the server rooms and then pull the return air from the racks back through the rooftop. Construction at the Dublin sites continues, Microsoft said.

Microsoft's Chicago Data Center is located in Northlake, Illinois, and will be one of the largest data centers in the world at 700,000 square feet - approximately the size of 16 football fields.

The Chicago facility will be Microsoft's first container data center will instead fill one floor of the huge facility with up to 220 shipping containers packed with servers. Each container houses 1,800 to 2,500 servers and can be wheeled into the facility and connected to the Internet within hours. Microsoft says its containers can run with an average PUE of 1.22.