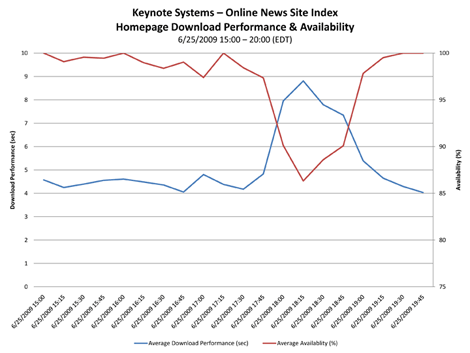 A chart from Keynote Systems showing the increase in response time (blue line) and decline in availability (red line) for major news sites after the death of Michael Jackson earlier today.

News sites and social media posting the earliest reports of the death of pop star Michael Jackson experienced availability problems as web users around the world sought to confirm the news and learn more. TechCrunch reports that TMZ.com, which was the first to report Jackson's passing, was soon knocked offline. Twitter soon struggled to remain available as the volume of messages surged, and turned off search features in account profiles to help manage their server load.

As the news of Jackson's death circulated, the traffic jam spread to more large news sites. Keynote Systems reported this evening that its monitoring showed performance problems for the web sites of ABC, AOL, CBS,  MSNBC, NBC, SF Chronicle, and Yahoo! News. "Beginning at 5:30pm (EDT), the average speed for downloading news sites doubled from less than four seconds to almost nine seconds," said Shawn White, Keynote's director of external operations said. "During the same period, the average availability of sites on the index dropped from almost 100% to 86%. The index returned to normal by 9:15pm (EDT)."

Some technologists quickly seized upon those problems as making the case for cloud computing. "There is no longer any good reason for a professional website property to go down because of load," wrote Reuven Cohen at Elastic Vapor. "Cloud computing provides an almost infinite supply of computing capacity, be it a infrastructure as a service or platform as a service or even a traditional CDN. Not have a cloud bursting strategy in the age of cloud computing isn't just wrong - it's idiotic."

Meanwhile,
SearchEngineJournal examined how the major search engines fared in updating their indices to help guide searchers to the most relevant news. The verdict? "Is Google Search lagging in breaking news coverage? Indeed it is," writes Loren Baker. "Microsoft BING however, has ABSOLUTELY FAILED in their coverage of the passing of Michael."