Opera Unite: Should Hosts Be Worried? 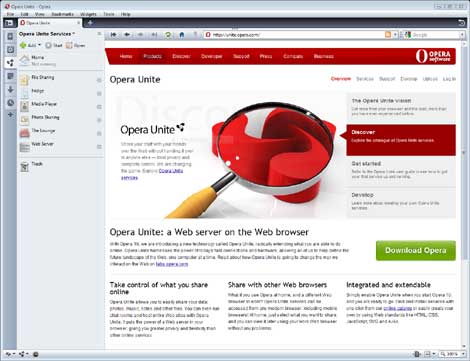 A look at the Opera Unite interface. The newest update includes a web server.

Has Opera reinvented the Internet? Or just come up with an interesting niche project for enthusiasts? Opera Unite transforms the web browser into a server, allowing users to share files and photos or even run a web site from within their browser (so long as the web site doesn't require PHP).

Opera is clearly targeting the web hosting and data center industry, hoping to build a business platform atop browser-based sites and services previously hosted by service providers. And it's using loaded terminology, with an introductory video attacking "servers belonging to strangers" and asserting that web sites are "at the mercy of middlemen who control the servers of the world."

"Our computers are only dumb terminals connected to other computers (meaning servers) owned by other people — such as large corporations — who we depend upon to host our words, thoughts, and images," writes Lawrence Eng, a product analyst for Opera, in a blog post introducing Unite. "We depend on them to do it well and with our best interests at heart. We place our trust in these third parties, and we hope for the best, but as long as our own computers are not first class citizens on the Web, we are merely tenants, and hosting companies are the landlords of the Internet."

Should the landlord be worried? Here's some reaction from around the web:

My two cents? This might be interesting for the enthusiast crowd, but has significant limitations for any sites that have meaningful audiences. I doubt Opera Unite would ever be taken seriously as a business hosting platform, although it may create some interesting opportunities for developing social networking applications.

What do you think? Is browser-based hosting a threat to the hosting and data center industry? Have you say in the comments.