Cisco Systems (CSCO) will shift all of in-house data centers to the company's new Unified Computing System in the next two years, the company said Wednesday. 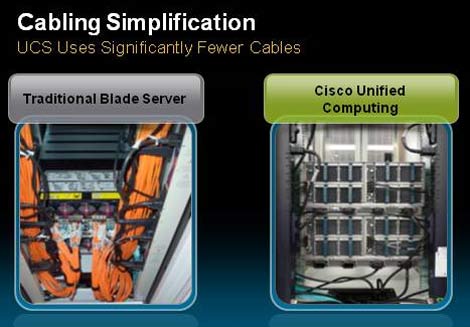 A visual example of the reduction in cabling Cisco says can be realized with its Unified Computing System.

Cisco operates 52 data centers, including 14 production facilities and 38 data centers used for product development of the company's networking and data center products. Cisco has a total data center footprint of 215,000 square feet, which uses about 20 megawatts of power.

The Unified Computing System brings together hardware - including the new B-Series blade server and network adapters - that seamlessly connect with storage systems over a high-speed unified network fabric powered by Cisco’s new Nexus family of switches, enabling virtualized assets to move seamlessly across the data center and the Internet.

Virtualization will be a key strategy as Cisco converts its existing x86 server infrastructure into a highly virtualized operation running over UCS. Chris Hynes, Cisco's Senior Director of Network and Data Center Services, said about 30 percent of Cisco's computing workload is currently virtualized, but the company hopes to raise that level to 60 or even 70 percent as it migrates to a unified infrastructure.

Cisco is already running its newsroom on the Unifed Computing System, as well as the IT for the office of chairman John Chambers. The company's conversion of its in-house data centers to UCS has external benefits as well, demonstrating the ability to implement UCS in existing data center environments as well as brand new data centers. Critics and competitors have alleged that Cisco's new technology requires an expensive "rip-and-replace" infrastructure upgrade.

Cisco's New Data Center
Cisco is also building a new 10,000 square foot data center that will showcase the potential of the Unified Computing System to reduce cabling and rely on fewer switches.

A unified network fabric using Fibre Channel over Ethernet offers the potential to reduce the number of interface connections on each server, eliminating the need for separate connections for Ethernet and Fibre Channel, a protocol that is widely used in storage area networks (SANs). This would result in fewer cables, adapters and switches, which in turn would reduce power consumption.

"We've managed to save a tremendous amount of cabling," said Hynes, who said UCS could allow Cisco's new facility to use up to 5,000 fewer cables in the same power footprint. "There are significant financial savings there. This also allows us to gain more compute power within the 1 megawatt data center."

Less Cabling = Lower Cost
Cisco said it expects to invest $1.6 million in gear for the new data center, while gaining computing power equivalent to a $2.7 million installation of traditional blade servers. John Manville, vice president of network and data center services for Cisco, said the expanded memory management features in Cisco's implementation of the new Intel Xeon 5500 processor could allow the company to run more than 20,000 virtual machines in its 1 megawatt power footprint.

Cisco is also using UCS to power an in-house cloud computing environment known as CITIES - short for Cisco IT Elastic Infrastructure Services. A first version of this  "platform to the clouds" will launch in August or September, with new features being added each four to six months.