Apple is planning a major East Coast data center to boost the capacity of its online operations, and may invest as much as $1 billion in building and operating the huge server farm. 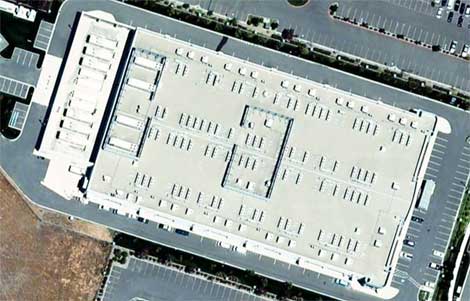 An aerial view of the Apple data center in Newark, Calif. The company is said to be planning to add a major East Coast data center (Source: Google Maps).

Apple is planning a major East Coast data center to boost the capacity of its online operations, and may invest as much as $1 billion in building and operating the huge server farm. The company is considering locations in North Carolina, where officials are rushing to pass enhanced tax breaks to woo Apple to their state rather than neighboring Virginia, which just passed its own incentives for data center projects.

The North Carolina House is expected to vote today on a package that would offer income tax breaks to companies that invest more than $1 billion over nine years in a rural area of the state and pay above-average salaries, according to local media.

The size of the project raises interesting questions about Apple's ambitions for its online operations. The $1 billion price tag is nearly twice the $500 to $600 million that Microsoft and Google typically invest in the enormous data centers that power their cloud computing platforms.

But the budget for the East Coast facility suggests a much larger facility than the 109,000 square foot Newark, Calif. data center Apple bought in 2006 to support its growing infrastructure. Apple also operates a data center on its Cupertino, Calif. campus, and has used content delivery networks from Akamai (AKAM) and Limelight Networks (LLNW) to distribute content to its users around the globe.

Apple is also considering sites in several counties in western North Carolina, and state legislators are rushing to update their data center tax incentives to offer the company a more attractive scenario than Virginia.

The tax package was detailed by the Charlotte Observer, which reports that the package would alter the equation used to calculate income taxes for companies that invest more than $1 billion over nine years. The current formula is based on a weighted combination of property, payroll and sales. The new bill would consider only the sales portion of the formula, which would reduce the tax bill for companies with a large investment in the state but modest local sales.

The N.C. House Finance Committee passed the measure Thursday, and is on the calendar for a vote by the full House today. The Senate approved the bill last week.

North Carolina previously offered tax incentives to attract a $600 million Google data center in Lenoir, a small town in Caldwell County. The estimated $100 million incentive package soon became a political football, even promoting a lawsuit from critics who challenged the wisdom of using taxpayer money to lure wealthy corporations to locate in the state.

Last fall Google told the state of North Carolina that it won’t meet the job creation criteria for a $4.7 million state grant for Lenoir project. The grant required the company to create 200 jobs in four years, but Google has slowed the pace of its project.

Nonetheless, the North Carolina Department of Commerce has estimated that the project will add $1.06 billion to the state’s gross economic product over the next 12 years, and produce a net state revenue benefit of more than $37 million.

One thing is certain: Apple will invest far more in the East Coast project than the initial cost of its Newark data center, which was acquired for approximately $45 million, a significant discount to its construction cost. The facility was one of 23 identical data centers built in 2000-2001 for WorldCom's web hosting business. WorldCom spent an estimated $110 million on each of the facilities.