How much digital stuff are we creating? According to IDC, the global volume of digital content has reached 487 billion gigaybtes. 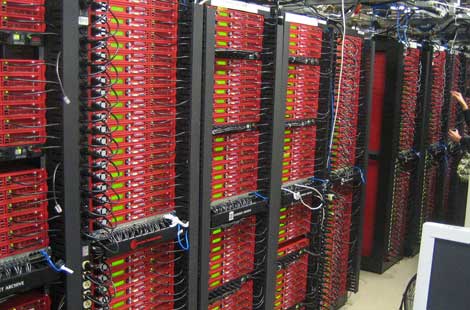 The PetaBox infrastructure used by the Internet Archive, circa 2007.

How much digital stuff are we creating? According to IDC, the global volume of digital content has reached 487 billion gigabytes - that's 487 exabytes, for those who can get their heads around that large a number. It's a lot of stuff.

A closer look at the Digital Universe report reveals that up to 95 percent of that digital deluge is unstructured data described as "packets, RFID, sensors and messages," with the remainder being computer files and images.

Should we care about this big-ass number? The IDC study is sponsored by EMC, a leading storage vendor who figures to be a major beneficiary of this data explosion. But when that data is saved to storage devices (EMC or otherwise) it goes to live in data centers. What does this data explosion mean for the data center industry? In a word, business.

For those who EMC has a handy Worldwide Information Growth Ticker to help you visualize how fast data is growing. It tracks the estimated volume of data created since Jan. 1, 2009.