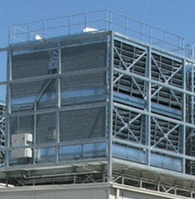 As data centers get larger, they are getting thirstier as well. The enormous volume of water required to cool high-density cloud computing server farms is making water management a growing priority for data center operators. A 15-megawatt data center can use up to 360,000 gallons of water a day, according to James Hamilton, a data center designer and researcher at Amazon.com.

"Water is tomorrow's big problem," Hamilton said. "No one talks about water. The water consumption (in data centers) is super embarrassing. It just doesn't feel responsible. We need designs that stop using water."

Some large data centers, like Switch Communications' SuperNAP in Las Vegas, have implemented direct expansion cooling systems designed to use lower amounts of water. Microsoft and Google are trying new approaches that use recycled water and nearby rivers and canals to cool their massive data centers, which is influencing where these facilities are located.

Microsoft says it picked San Antonio for one of its new data centers because the local water company could provide large amounts of recycled water, meaning the project would have less impact on the city's drinking water supply. Google's new data center in Belgium is located next to an industrial canal for cooling, while other providers are incorporating wells and captured rain water into their cooling systems.

Role of Cooling Towers
Why worry so much about water? The move to cloud computing is concentrating enormous computing power in mega-data centers containing hundreds of thousands of servers. All the heat from those servers is managed through cooling towers, where hot waste water from the data center is cooled, with the heat being removed through evaporation. Most of the water that remains is returned to the data center cooling system, while some is drained out of the system to remove any sediment, a process known as blowdown.

When this process is played out at mega-data center scale, the amount of water required for cooling can be enormous, sometimes exceeding the capacity of local utilities.

Impact on Local Water Systems
Last year the city of Northlake, Ill. expanded its water capacity to support Microsoft’s massive new data center in town. In August 2008, the neighboring city of Franklin Park agreed to sell up to 2 million gallons of water capacity to Northlake in an intergovernmental agreement. The cost of the deal, as well as Northlake’s $8 million investment in pumps and a generator, will be paid for by water sales to Microsoft, which has not yet completed construction on the facility.

These cooling systems don't require potable water, which was a key point in Microsoft's San Antonio facility. "One of the unique features of the San Antonio area is their great recycled water systems," said Debra Chrapaty, Microsoft’s corporate vice president for Global Foundation Services. "As part of our commitment to the environment, we’re using approximately 8 million gallons of water (per month) from this system for our data center cooling needs."

Recycled or "grey" water isn't fresh or drinkable but is not contaminated by any toxic substances or toilet wastes. Grey water is considered environmentally friendly because it reduces demands for fresh water and doesn't consume the energy required to purify it at waste water treatment sites. The San Antonio Water System has been offering recycled water to its industrial customers since 1996.

Another strategy to lessen the impact of data centers on local water utilities is to  your own water supply, either by tapping nearby bodies of water or collecting rainwater.

Google's Belgium Project
Google is using water from a nearby industrial canal to cool its data center in Ghislain, Belgium. The company has built a 20,000 square foot water treatment plant to prepare the canal water for use in its nearby data center.

Google's approach may not work for everyone, according to Ramzi Namek of Fortress International Group, who gave a presentation on water conservation at last fall's Data Center World conference. Namek noted that using surface water from canals, lakes or rivers often requires negotiations with local jurisdictions and the EPA, particularly if hot waste water is being returned to the environment. Permitting and negotiations in these scenarios often move slowly, which may affect the project timetable.

"Look at creating a basin next to your facility that you can use," to collect water," Namek said. "In some cases, you can use concrete basin tanks, or install large tanks under the parking lot and can collect water from the lot."

Wells, New Equipment Also Help
Or you can drill a well. That's the path chosen by credit data service Experian, which dug a 1,200 foot deep well to secure a water supply for its Dallas-area data center. The well lessens the facility's reliance on the local water utility, but was driven by self-interest as much as conservation. The move was prompted by an incident in which its main water line broke, forcing the company to use deliveries from water trucks to keep its data center online.

Some companies use a blowdown reclamation system to recycle water from their cooling tower. Investing in new cooling towers can save conserve water and money, Namek said.  "If you have a cooling tower that 30 years old, a new tower is better," he said. "Invest in a water treatment and filtration system to take solids out of the blow down. You can use a managed magnetic pulse inside the cooling tower to dissolve solids and filter them out." See Building Green for more information on methods to keep cooling towers free from deposits that can reduce itheir efficiency.