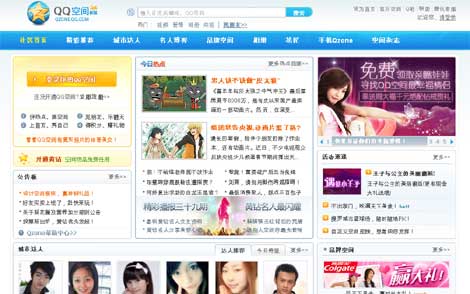 Is China's Qzone (pictured above) the largest social network and blog host?

Are those numbers accurate? The reportwas based on statistics from TenCent, the Chinese company that owns Qzone and the associated QQ instant messenger.

One independent survey suggests Qzone is already larger than MySpace, but remains silent on the larger question of whether the Chinese portal challenges Facebook in size. Netcraft has just begun tracking Qzone in its monthly web server survey, and finds 20 million Qzone blogs under the QQ domain, a total that "instantly makes the company the largest blog site provider in the survey, surpassing the likes of Windows Live Spaces, Blogger and MySpace."

A caveat: Netcraft's survey doesn't capture all the activity at social networks, and focuses on sites rather than users, a distinction based on exploration of site structure and DNS records that results in reporting primarily of blogs rather than profiles. Netcraft's search agents likely have difficulty assessing the entirety of social networks with access controls (which may be why it seems to have limited data on Facebook).

This month's Netcraft survey also includes good news for open source enthusiasts, as the Apache web server is now running on more than 100 million sites for the first time.