Powering A Data Center With Methane

Can methane power a data center? T-Systems is using biomethane and a fuel cell to provide power for a server room in a facility in Munich, Germany. 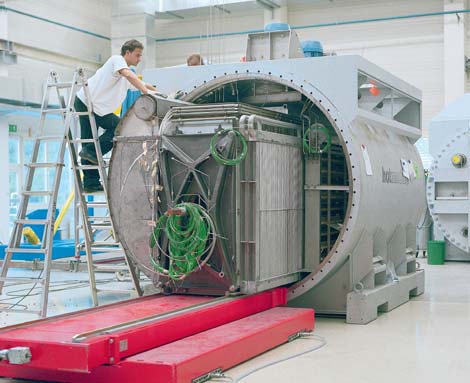 T-Systems is using this Molten Carbonate Fuel Cell to power part of its Munich data center with biomethane. The system generates 245 kilowatts of power.

Can methane be harnessed to power a data center? Mark Fontecchio at TechTarget has an item this morning about a proposal in Chicopee, Mass. to use methane gas from a local landfill to power a data center. The town's mayor has reached out to Dow Jones about building a data center in Chicopee, using the biogas potential as a hook. As Mark notes, Google is using landfill gases to power a greenhouse in North Carolina, while Fujifilm has a South Carolina manufacturing plant incorporates methane into its power base.

There's a working precedent for using biomethane to power a data center. T-Systems is using a "hot module" fuel cell to provide power for a server room in a facility in Munich, Germany, which runs on biogas supplied by a planet in nearby Pliening.

The module, officially known as a Molten Carbonate Fuel Cell, is built by CFC Solutions Gmbh and generates 245 kilowatts of power. During cultivation, the energy crops absorb the same quantity of CO2 that is later released by the data center. T-Systems uses the waste heat from the fuel cell in an absorption cooling cycle. The company describes the Munich operation, which was launched in July 2007, as a "long-term test" to pioneer environmentally friendly data center energy.

The company provides a detailed description of the system and additional photos of the fuel cell and the Munich data center.