1 Million E-Commerce Sites on the Web

Internet commerce has hit an interesting milestone: there are now more than 1 million web sites using SSL to provide secure connections to their public web sites. 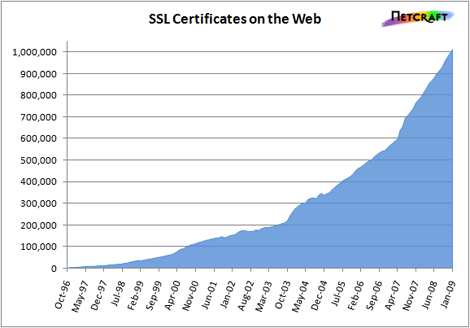 Internet commerce has hit an interesting milestone: there are now more than 1 million web sites using SSL to provide secure connections to their public web sites, according to Netcraft. While overall Internet growth has showed signs of slowing in recent months, the number of SSL sites has continued to grow at a steady clip of about 18,000 sites a month.

Web sites use encryption to provide a secure connection between their web server and an end-user's browser, allowing the secure transfer of sensitive information such as credit card numbers for online transactions. Encryption is enabled by the Secure Sockets Layer (SSL) and Transport Layer Security (TLS) encryption protocols, which are implemented through SSL certificates that verify the identity of the web site operator.

Since the introduction of SSL, Internet users have been urged to check for the "golden lock" icon in their browser to ensure a web session is encrypted before conducting e-commerce transactions. SSL certificates initially cost more than $100 apiece, but have dropped dramatically in price in recent years with the market entry of low-cost providers like Go Daddy, GeoTrust and Comodo.

SSL certificates are purchased for a number of reasons. But the solid majority of web sites running SSL are using it to provide security for retail transactions or online banking, making the number of sites running SSL a good metric for tracking the growth of Internet commerce.