The Internet shrunk by 1.2 million web sites last month to 185.5 million sites, the largest monthly loss since the dot-com bust era, according to Netcraft. 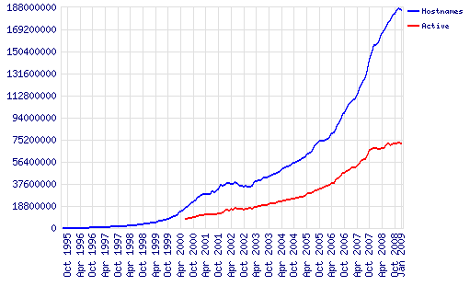 The Internet shrunk by 1.2 million web sites last month to 185.5 million sites, the largest monthly loss since the dot-com bust in 2003, according to new data from Netcraft. The results are a sharp departure from a long-running growth trend that has seen the Netcraft survey add between 1 million and 4 million sites per month.

The decline was driven by large losses at blogging platforms operated by Microsoft and Google. Microsoft saw a loss of more than 2 million blogs hosted on IIS (the majority likely at Microsoft Spaces) while Google saw a drop of more than 800,000 sites using its GFE server, which supports Blogger.

Growth of blogs at Spaces and Blogger have been among the factors supporting the steady upward trend in recent years. Large fluctuations on these platforms are not unusual, but have historically been offset by broader gains at other hosting companies.

What's behind the sudden shift? One month doesn't establish a trend, and there are many variables in the hosting world and the Netcraft data that change from month to month.

One possibile explanation for this month's decline is the downturn in the domain market, which in recent months has seen fewer new domain registrations. "Pay per click” ad payouts have been declining on parking pages, which has led some in the industry to predict that domain renewals may slow as large portfolios see more parked domains become unprofitable.