i/o Data Centers has leased a 530,000 square foot, power-rich industrial building in Phoenix and plans to convert the facility into a data center. 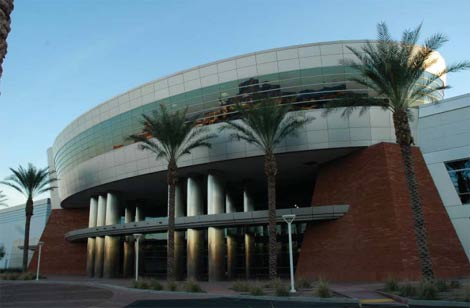 i/o Data Centers has leased a huge, power-rich industrial building in Phoenix and plans to convert the facility into a data center, the company said today. At a time when data center construction has been sharply curtailed by the credit crisis, i/o Data Centers said its "Phoenix ONE" project is fully funded following a $56 million equity investment last month by Sterling Partners.

The 530,000 square foot facility near Sky Harbor Airport was built in 2005 to house the bottling operations of LeNature's Beverages, which never fully occupied the building before filing for bankruptcy. i/o Data Centers has signed a 20-year lease with landlord CBRE Investors, and plans to use the site as both a data center and its corporate headquarters.

The 31-acre campus currently has 40 megawatts of power and an on-site substation, and i/o Data Centers says it will eventually expand capacity to 120 megawatts. Six fiber providers have committed to providing connectivity for the building, which is adjacent to a major fiber trench.

Local officials were thrlled to have a tenant for the huge building. They're also familiar with Wanger and the i/o Data Centers team, who developed the city's carrier hotel at 120 East Van Buren, which is now owned by Digital Realty Trust (DLR).

“The Phoenix facility is a great fit for i/o’s data center and the local community,” said Phoenix Mayor Phil Gordon. “It is perfectly situated in Central Phoenix and offers the size and abundant supply of power to attract numerous Fortune 500 companies, while providing high-wage, highly-skilled job opportunities for local Phoenix residents.”

Wanger said i/o Data Centers' first phase of construction will feature 180,000 square feet of raised-floor data center space in four pods, with the first two pods completed by June 1and the next two available as of Sept. 1.

"We are able to turn the space this quickly because most of the 'big and heavies' are in place," said Wanger, who said the site has a 69kv electrical sub-station, 18 internal 480v sub-stations and redundant chiller plants and water feeds. The company will install computer room air handlers (CRAH), UPS systems and 2.25 megawatt generators to complete its retrofit for data center use.

Wanger said the existing infrastructure will save up to $20 million in costs. "We like inheriting in-place improvements and find these sites help speed to market," he said. "For example, this sub-station would take 18 to 24 months to design, permit, build and connect."

i/o Data Centers said it will also expand its current 125,000 square foot data center in Scottsdale, known as Scottsdale ONE. With the facility near capacity, the company is converting 8,000 square feet of office space into two data center pods with 4 megawatts of conditioned power.