Power Usage Effectiveness (PUE) has become the leading metric for measuring data center energy efficiency. The Green Grid talks about the progress on green metrics, and some of the controversies.

What’s the most popular “green data center” metric? The end users have spoken, and the clear winner is Power Usage Effectiveness (PUE) developed by The Green Grid. In recent months, a succession of leading data center operators have published their PUE rankings as a benchmark for their energy efficiency efforts.

The PUE metric (PDF) compares a facility's total power usage to the amount of power used by the IT equipment, revealing how much is lost in distribution and conversion. An average PUE of 2.0 indicates that the IT equipment uses about 50 percent of the power to the building (see more detailed explanations here and here).

The embrace of PUE by companies including Google, Microsoft, Sun Microsystems, HP and Digital Realty Trust has provided a focal point for the data center industry’s push towards energy efficiency. It has also raised questions about whether such metrics are only appropriate for measuring internal progress, or can be used to compare the energy efficiency progress of leading providers.

Controversies Emerge
Discussions of PUE have become contentious at times, with some industry observers openly challenging Google's data, and one critic asserting that by publishing low PUE numbers, Microsoft and Google had become the enemy of traditional data centers.

As more companies use PUE to track their energy efficiency, the Green Grid is offering guidance on best practices for measuring energy usage. Green Grid board member John Tuccillo says the emergence of PUE has fulfilled one of the group’s key goals.

“We wanted to find a way to have a common language, and wanted to give folks something simple to use and easy to understand that doesn’t require a lot of technology,” said Tuccillo. “We look at PUE as a first step. We also realize it’s an incomplete body of work. It’s a great first step, but there’s more to do.”

The Green Grid recently provided recommendations to members on whether to take power measurements at the UPS level, branch circuit or at the PDU (power distribution unit). “People are looking for guidance” on where to take measurements, said Tuccillo. 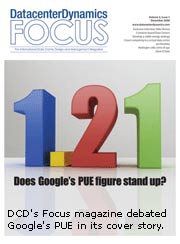 In October, Google shared information on the energy efficiency of its data centers, reporting a PUE of 1.21 for six company-built facilities. The disclosure prompted critiques from industry watchers. Some challenged the company’s math, or its decision to not include third-party hosting centers in its PUE assessments. Others noted that the reporting of one-time "snapshots" of PUE are less useful than tracking over time.

Google isn't alone in sharing low PUE ratings. In November, Microsoft said its new data center containers operate with a PUE of 1.22, inviting comparisons between the two Internet titans, who have been leaders in data center innovation and corporate commitments to green data centers. HP reports a PUE of 1.25 for its POD container, while Sun published a 1.28 rating for its Santa Clara data center.

Tuccillo said the public disclosure of PUE ratings is “not a bad thing." But he added that PUE "is really there to be a metric for self-improvement. After you get some measurements over time, you’re in much better position to make decisions.”

He noted that The Green Grid had no plans to certify PUE ratings or act as a referee in disputes over scores or methodologies. “You’re not going to find a Green Grid energy assessor going out there, but we’ll help provide guidance, and provide a variety of tools and methodologies,” Tuccillo said.

DOE Training Energy Assessors
That includes an initiative in which The Green Grid is working with the U.S. Department of Energy. Tuccillo said the DOE plans to train and certify energy assessors, who in turn can provide PUE guidance for data center operators. The program will be similar to the DOE’s Save Energy Now program, which provides energy efficiency assessments at manufacturing sites. The DOE web site has more information about its data center initiatives.

The PUE metric has its critics. Among the most vocal has been Ken Brill of the Uptime Institute, the Santa Fe, N.M. company that developed the Tier System for data center reliability. Brill has used Uptime webinars and a series of guest columns at Forbes.com to allege that companies are “gaming” PUE ratings to produce improbably low numbers.

Uptime is developing its own metrics and programs to vertify data center energy efficiency, some of which may use PUE as part of a broader spectrum of measurements. The group plans to unveil its full program at its Symposium 2009.

In an October Uptime event, Brill is reported to have described the PUE reporting by Microsoft and Google as a threat to the data center industry, prompting a response by Microsoft's Mike Manos.

"While many people (external and internal) approached me about pulling out of the Uptime organization entirely or even suggesting that we create a true not-for-profit end user forum, motivated by technology and operations issues alone, I think its more important to stay the course," Manos wrote. " As an industry we have so much yet to accomplish."

He noted that Green Grid also has a committee tasked with working with other industry organizations like ASHRAE, the Distributed Management Task Force (DMTF) and the Storage Networking Industry Association.

The Green Grid now has more than 200 members. While the group was organized by major vendors, end users now represent about 20 percent of its membership. Participation of companies in Europe and Asia is also on the rise, Tuccillo said.